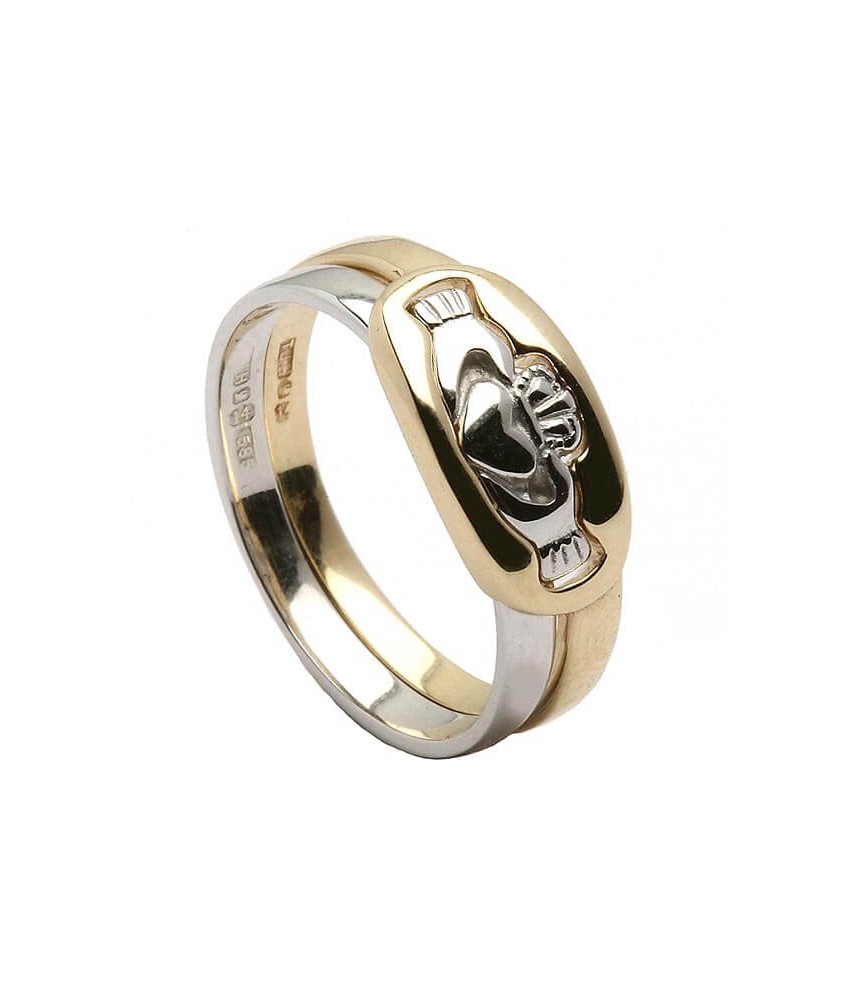 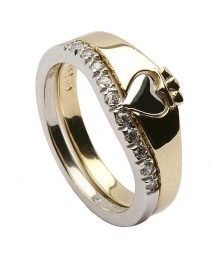 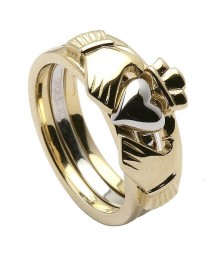 Availability: This product is no longer in stock

Introducing the 2 Piece Claddagh Ring. This is an unusual and elegant version of the traditional Claddagh ring. It looks like one ring, but it is handcrafted in two separate pieces, one made from white gold, the other from yellow gold. This gives an attractive two-tone effect to the design, which is over 300 years old.

Available in either 10K or 14K gold, your 2 Piece Claddagh ring will be hallmarked by the Dublin Assay office as proof of quality.

Long ago near Carterhaugh, Scotland, there lived a girl named Seonaid, who was very lovely with long blonde hair and bright blue eyes. She was the daughter of an Earl, and one day she went off into the woods to escape her boredom at home.

She came to a forest, where she found numerous types of flowers. She wanted to take one home so she chose a white rose to wear on her wrist. That was when a voice startled her, “How dare you pick the flowers and stroll about the forest without my permission!”

The voice came from a young man around Seonaid’s age. He had long black hair and deep blue eyes. He continued to say, “I am he who guards this forest and sees to it that the peace is not disturbed!”
She told him she meant no harm, and he smiled, picked a red rose, and told her, “I would gladly give away all the roses in Carterhaugh for your beauty."

Taken off guard, Seonaidh asked the stranger for his name. He replied, “I am Tam Lin.” Upon recognizing his name, Seonaidh dropped her rose because he was Tam Lin the Elfin Knight and champion of the land of fairies, Annwn.

Afraid for her safety, Seonaid told Tam Lin once again she meant no harm. To this he told her his story, “I was born a mortal child just as you were. My grandfather, who was the Earl of Roxburgh took me hunting with him when a spell overcame me, and I fell asleep. When I awoke, I was in Annwn, the land of the fairies. The Fairy Queen holds me trapped in her spell, and I yearn for the chance to come back and stay in the realm of man.”

After hearing the whole story, Seonaid became sad, and she asked Tam Lin if there was any way he could be freed. If there were, she would help him anyway she could. He took her hands in his own and told her of the only way he knew, “Tonight is the night of Samhain, when the fairies ride across the land, and I asa their champion must ride with them. When midnight comes, wait by the crossroad, and you will see three companies of elves pass by. Let the first two pass. I will be amongst the third wearing a gold circle about my brow and riding a snow white charger. You must run to me and pull me from the steed. Then no matter what spells the cast, do not let me go.”

Seonaid gave him her word. Then she rushed home to sleep to be prepared for the night.

At midnight, Seonaid waited near a ditch hidden by hedges at the crossroads. She soon heard the sound of hooves and jingling bridles and knew the fairy host was on its way. She remained hidden as the first group passed, which contained the Fairy Queen and as the second group passed. Finally, when the third party came, she could see Tam Lin immediately. She at once ran from her hiding spot, seized him, and held him in her arms.

The Queen noticing this screamed, “Tam Lin is away!” She stopped her horse immediately and her beautiful eyes were frightening to Seonaid; however, she would not let Tam Lin go. The Queen turned Tam Lin into a lizard, but Seonaid did not release her grip. Seeing as this did not work, the Queen then turned Tam Lin into a snake, but Seonaid merely wrapped the snake around her to better hold him. On a third attempt, the Fairy Queen transformed Tam Lin into a red hot brick, and this caused Seonaid to scream; however, she still did not let go and only held him closer to her.

The Fairy Queen realized she had been beat and turned Tam Lin back into his true form. She then rode away saying, “Farewell, Tam Lin, best of my knights gone from me, but for the love of a mortal woman. If I knew a woman born of man could win you away, I would have taken out your heart a long time ago.”

Tam Lin kissed Seonaid’s burnt hands, and they returned once to her father’s castle. Here Tam Lin was welcomed back into the world of man, and he and Seonaid were married and had many children.