Home> Celtic History> Ardagh Chalice - How it was found and by whom.

The two men had cleverly grown potatoes inside a ring fort at Reerasta, near Ardagh, in order to avoid the effects of the potato blight of the Great Irish Famine. When digging between the roots of a thorn bush, they found the spade strike something hard. They cleared away the earth and found a beautiful cup now known as the Ardagh chalice. This was the finest example of 8th Century metalwork ever discovered. 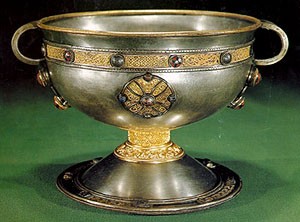 Ireland's foremost treasure, the Ardagh Chalice, is currently housed in the National Museum of Ireland.

The Changing of Hands

Flanagan promptly left the employment of the Quin family (it is rumoured that it was in fact he, and not Quin who discovered the precious artefacts, but Quin who took all the credit) while Jimmy Quin later emigrated to Australia, leaving sole possession of the chalice to Mrs Quin, who decided to sell it to the then Bishop of Limerick, Dr. Butler for 50 Irish pounds.

Ever the keen eye for a bargain, Butler later resold the chalice for a fee of 500 pounds to the Royal Irish Academy. Along with the chalice, a number of objects were also found including a smaller bronze chalice, four ornate brooches, and a wooden cross. 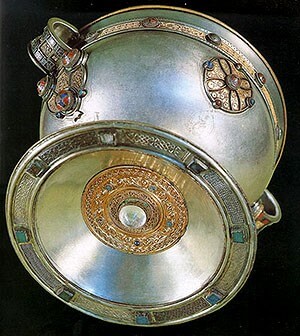 "A wide range of materials has been used to create a work of perfection."

History of the Ardagh Chalice

These items, along with the prized chalice became collectively known as the “Ardagh Hoard”. The cross gives us a vague idea of the time of burial thanks to an engraving with the numbers 727, which are believed to have indicated the year 1727.

At this time Ireland was under Penal law and it would not have been unusual for Mass to be held in secret at the Rath(irish for a circular fort).

One popular theory suggests that maybe the hoard was buried in haste due to the approach of enemy soldiers. This would explain why the artifacts were buried without a case to protect them. For whatever reason, whoever concealed these precious objects was never to have the opportunity to return for their collection.

This extract from “The Treasures of Early Irish Art: (Metropolitan Museum of Art, New York: 1977) describes the chalice in fine detail.

“A wide range of materials has been used to create a work of perfection. The silver bowl, provided with handles for lifting, is linked by a gilded collar to a conical silver foot, made more stable by a broad horizontal flange…on the chalice, where decoration is used, it is sumptuous. Ultimate La Tène scrolls, plain interlace, plaits and frets abound. The techniques employed are engraving, casting, filigree, cloisonné and enamelling. Below the horizontal band of gold filigree on the bowl the names of the Apostles in shining metal stand out in sea of stippling.”

The Ardagh Chalice is undoubtedly one of the most prized examples of eighth century metalwork in existence today. The combination of silver, bronze and gold coupled with the artistic and technical expertise evident in its design, which are thought to be, quite literally, centuries ahead of their time ensure that The Ardagh Chalice remains the most celebrated of Ireland’s historical artifacts.

Ireland’s most revered treasure is now housed at the National Museum of Ireland.

The chalice type is called a 'calyx ministerialis', made to dispense Eucharistic wine to the congregation. Its design, even at the time of its manufacture, was somewhat old fashioned and harked back to the common Byzantine and western chalices.