Ultimately, William’s experience as a commander, and an army with 12,500 more troops, proved too much. Despite the battle’s reputation, the number of deaths (no more than 2,250 according to some estimates) was much lower than one would expect. It was also far from being the decisive battle in the conflict. 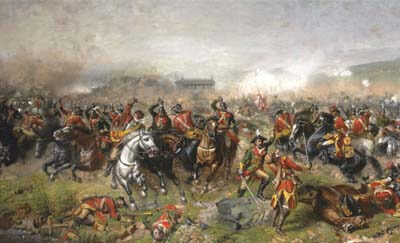 "It was actually the Battle of Aughrim in July 1691 that gave William victory."

It was the Battle of Aughrim in July 1691 that gave William victory. This fact was confirmed by his success in the Siege of Limerick in October 1691. James fled to France after the Boyne, and William’s success paved the way for the Protestant domination of Ireland for centuries. Today, the Orange Order still celebrates the Battle of the Boyne with an annual march on July 12.

The Battle of the Boyne is often erroneously portrayed as a fight between Protestantism and Catholicism. In truth, it was far more nuanced than that. Many of James II’s opponents indeed hated him for his Catholic beliefs, and William was a Protestant. However, William had the support of Pope Alexander VIII.

At that time, the Pope was part of the Grand Alliance, which opposed the military actions of the French king, Louis XIV. James had the support of the French monarchy. In the end, the battle was part of a conflict that was politically motivated. Indeed, a significant number of people on both sides switched during the war, and did NOT change religion! Ultimately, the war was about British society’s foundations. It was a choice between a parliamentary or absolutist monarchy.

The Williamite War in Ireland

Born in the Netherlands in November 1650, it was not immediately apparent that William Henry would have such a profound impact on British and Irish history. However, the Prince of Orange was the nephew of Charles II of England, and as an adult, he was heavily involved in fights against French and English invaders.

He married his first cousin, Mary, in 1677. She was the oldest surviving daughter of the man who later became James II of England. It was a blatant attempt to further his position and placed him in line for the British throne should his uncle James lose out due to his Catholicism. His plans were thwarted when James became king in 1685, upon the death of Charles II. 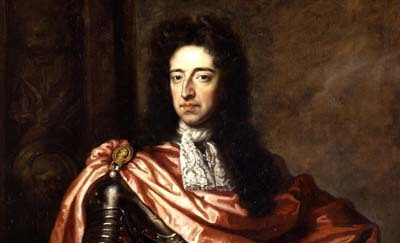 "In April 1689, he officially became King William III of England, Scotland, and Ireland."

Relations between the two men gradually soured to the point where William invaded England in April 1688. It didn’t take long for James’ support to dwindle. By December 1688, William had all but succeeded, though he allowed his rival to leave the country. In April 1689, he officially became King William III of England, Scotland, and Ireland.

A significant minority of his subjects believed in the ‘divine right of kings.’ A group that became known as the Jacobites pushed for the restoration of James and his heirs until the middle of the 18th century.

The Williamite War officially began in March 1689 with the arrival of Franco-Irish Jacobites in Ireland. James was confident of his support and landed at Kinsale on March 12. The following month saw a Jacobite rising in Scotland by Viscount Dundee. James joined the Siege of Derry in April 1689.

Things looked good for James until several momentous events went against him in July and August 1689. Dundee died at Killiecrankie, Williamites raised the Siege of Derry, and the Jacobites were defeated at Newtownbutler. In the space of a week, the Jacobites went from having a firm hold on Ulster, to losing control.

While the Jacobites were on the ropes at this stage, the Williamite commander, the Duke of Schomberg, was unable to finish things off. By April 1690, the Jacobite position was desperate, and they decided to hold a line along the River Boyne. They destroyed or removed crops and livestock, an action that devastated the local community for half a century.

William faced demands from England to deal with the enemy. He travelled to Ireland in June 1690 with an enormous army. By the end of the month, James had positioned himself at the River Boyne. The Williamites reached the river by June 29.

History was almost changed forever on June 30, the day before the battle. William was analysing the fords, plotting ways for his men to cross the Boyne. Enemy artillery fired and struck the king on the shoulder.

The Battle of the Boyne Unfolds

The Battle of the Boyne took place near Drogheda on July 1, 1690. The Williamite forces of 36,000 men heavily outnumbered their Jacobite counterparts who took the field with 23,500 men. Troops aided William from the Dutch Republic and the Danish Auxiliary Corps. Meanwhile, James had help from France. 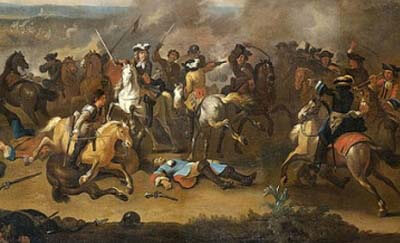 James’ inexperience came to the fore during the battle, as the seasoned general William successfully tricked his opponent. He sent around 10,000 of his men towards Slane, an action designed to draw the enemy upstream. It worked because James believed he would get outflanked. He made the mistake of sending all but 6,000 of his troops, including his best French soldiers and artillery, to counter the move.

What neither army realised was that there was an impassable ravine at Roughgrange! Once the troops got there, they understood that engagement was impossible. Artillery fired, but the men on both sides were spared the horrors of hand-to-hand combat at that stage.

Meanwhile, back at Oldbridge, William’s infantry was able to force back the enemy. Jacobite cavalry attacks prevented a breakthrough, and William’s leading general, the Duke of Schomberg, died at this point. Once the Williamite horsemen crossed the Boyne, they were able to hold off the enemy cavalry attacks, incurring some losses in the process.

The Battle of the Boyne was one that didn’t have a spectacular conclusion. The Jacobites, realising they were overmatched, were able to flee in decent shape. William almost trapped them during the retreat, but the Jacobites managed one last rear-guard action. The order to retreat ended the Jacobites’ chances of victory. Many of their men deserted, and William was able to march into Dublin just two days later.

The Aftermath of the Battle of the Boyne

An estimated 2,250 men died during the Battle of the Boyne, about 1,500 Jacobites against 750 Williamites. Some historians place the total number of fatalities at 1,500. By all accounts, William’s army sustained far more non-fatal wounds. The Jacobites abandoned Dublin and went to Limerick. The Williamites failed to take the city in the unsuccessful Siege of Limerick, which ended in September 1690. 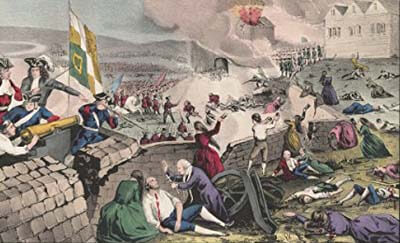 "The Williamites failed to take the city in the unsuccessful Siege of Limerick, which ended in September 1690."

On July 17, William issued the Declaration of Finglas. In it, he offered full protection for any Jacobites that surrendered by August 1, barring the leaders. Not many took the king up on his offer, though he had far more joy with the Treaty of Limerick in October 1691.

What many people don’t realise is that the Protestant victory at the Battle of Beachy Head, just two days before the Boyne, was a far more significant event in the war. William’s victory at the Battle of Aughrim on July 12, 1691, all but ended James’ cause in Ireland. A second Siege of Limerick resulted in complete Williamite victory in October 1691.

It led to the evacuation of Jacobite and French troops from Ireland. James had fled to France after the Battle of the Boyne and died there in 1701. William outlived his old rival by a year, dying in March 1702.

The repercussions of the Battle of the Boyne, and the Williamite War, have lasted for centuries after the deaths of both kings. It was the last time that two crowned monarchs of England, Scotland, and Ireland faced one another on the battlefield. It helped ensure Protestant ascendency in Ireland for centuries. Those who were not Protestant members of the Churches of England or Ireland were excluded from positions of influence.

Although it was not the decisive conflict in the Williamite War, the Battle of the Boyne has become a significant part of the Orange Order. The Masonic-style organisation was founded in 1795. If the battle happened on July 1, why do the Orange Order celebrate it with a march on July 12 each year?