Boudicca has been described as the ‘first British heroine’ and is an early example of Girl Power in action!

Not a great deal is known about Boudicca’s early years which is hardly a surprise since we are relying on the writings of two Roman scribes; Tacitus and Cassius Dio, and Boudicca’s reign occurred when the former writer was a baby and around 100 years before the birth of the latter! However, both men agree that she was of Royal descent and was known for being extremely intelligent. It is said that she struck quite a figure as she was tall, powerfully built with long red hair, a piercing stare and harsh voice.

She got married to Prasutagus, king of the Iceni tribe who lived in Norfolk. The Iceni initially managed to retain independence when Claudius conquered Britain in AD 43 and threatened a revolt four years later when a Roman governor made plans to disarm the tribe. Prasutagus wanted to preserve the peace so before he died, he made the Roman emperor co-heir to his kingdom along with his Boudicca and her two daughters. 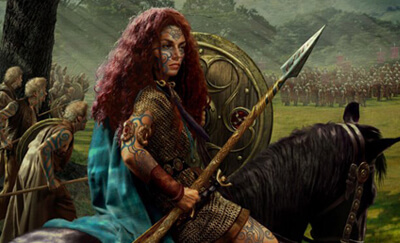 It is said that she struck quite a figure as she was tall, powerfully built with long red hair, a piercing stare and harsh voice.

Unfortunately, the king made a grievous error since under Roman law, inheritance was only allowed through the male line so when Prasutagus died with no male heir, the Romans annexed the Iceni kingdom. It was as if the tribe had been conquered even though they had not been defeated on the battlefield.

The leading tribesmen of the Iceni had their land taken away and Boudicca claimed that she was raped and flogged along with her two daughters. This is where the legend of Boudicca really begins as in AD 60, she raised an army and joined forces with the Trinovantes, another disaffected tribe. It says much for Boudicca’s character that she was chosen to be the leader of the combined forces. Sources suggest that the tribes took inspiration from their ancestors who drove the Romans from Britain 100 years before and the prince of the Cherusci, Arminius, who defeated the Romans in Germany half a century previously.

Boudicca wasted no time and her forces destroyed Camulodunum (modern day Colchester) which was the previous Trinovantian capital before it was taken by the Romans. When the Romans inside the city appealed for help, only 200 soldiers were sent and Boudicca’s forces showed no mercy and wiped out the inhabitants. Modern historians stated that the fury of this attack was akin to a mini Pompeii or Herculaneum, cities that had been destroyed by volcanic eruptions! A Roman governor tried to assist the city but his forces were also annihilated. Archaeologists claim that the city was methodically destroyed by the rebels.

The timing of the revolt was impeccable because the governor, Gaius Suetonius Paulinus, had his hands full on the Isle of Anglesey where his army was busily destroying a Druid settlement at Mona. As a result, initial battles were one-sided as Boudicca’s army greatly outnumbered the Roman enemy. While Cassius Dio estimated her army to have 230,000 soldiers, this is almost certainly an exaggeration. 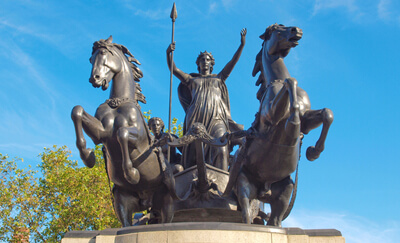 When Boudicca’s army arrived, a massacre took place and all those within London city died.

The next target was Londinium (London) and while Suetonius had returned with a small garrison, he decided not to defend the city and abandoned it to its fate. When Boudicca’s army arrived, a massacre took place and all those within the city died. While the Roman sources claim that 70,000 people died in the rampage, again, it is probable that this number was exaggerated to dehumanise the Celtic forces.

Boudicca’s revolt was not to last much longer however as Suetonius gathered an army of 10,000+ trained soldiers and prepared for battle at Watling Street, an ancient trackway that linked Canterbury and St Albans. It was AD 61 and Boudicca’s army came from St Albans to meet the Roman governor. This was to be a grave mistake as it gave the Romans a massive advantage; while they were heavily outnumbered, the Romans had excellent equipment and experience in battle. In contrast, few of Boudicca’s army had armour and most were armed with agricultural tools.

It is said that Boudicca sat on a chariot and gave a rousing speech before the battle. Tacitus wrote that the Queen of the Iceni told the Romans that she was avenging lost freedom and the abuse of her, her daughters and her kingdom. She concluded by saying her cause was just and that she would rather die than live as a slave.

The fleeing rebels were blocked by their own wagons and slaughtered by the merciless Romans.

While this surely roused her army, she did not have the tactical knowledge to get the best out of her advantage in numbers in an open field and the Romans began with a salvo of javelins which killed thousands of the rebels. The Romans then attacked in a wedge formation and the fleeing rebels were blocked by their own wagons and slaughtered by the merciless Romans. Given the numbers of the field, it was a surprisingly quick battle though Tacitus was probably exaggerating again when he said 80,000 rebels died while only 4,000 Romans perished.

The Roman sources disagree on what happened to Boudicca after the battle. While Dio claims she died of an illness, Tacitus’ account of how she committed suicide by drinking poison to avoid capture seems more likely.

Boudicca’s rebellion may have ultimately failed but she is now seen as a modern day heroine. Historians have remarked on how the Iceni queen is an icon of British history while being a symbol both of British freedom and also of female power. The enduring nature of her legend can be seen through the various movies retelling the story and in 1902, a statue of Boudicca was unveiled near Westminster Bridge in London. It is an amazing image of a proud female warrior standing in a war chariot, holding a spear; it is a figure of fearlessness, hope and freedom and aptly sums up a remarkable woman who was prepared to stand up to the might of Rome and die for a cause she believed was just.