Brian Boru was born in the year 941 in the kingdom of Munster, located in the south of Ireland. He was the youngest son of Cennétig mac Lorcáin, a king of the Dalcassian clan. Boru's mother, Bé Binn, was a member of the Eóganachta, another powerful Irish clan. 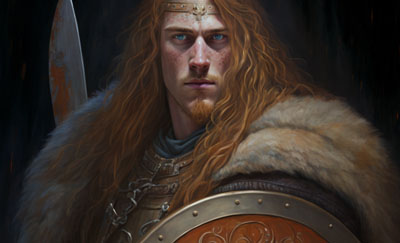 A younger Brian Boru as a Celtic warrior.

Boru grew up during a time of great political turmoil in Ireland. The country was divided into several smaller kingdoms, each ruled by a different clan. These clans were constantly at war with one another, and Boru was raised to be a warrior. He learned the skills of combat and leadership from a young age, preparing him for the military career that would define his life.

Despite the political instability and constant fighting in Ireland, Boru received a well-rounded education. He was trained in the arts, literature, and language, and was known for his love of poetry and music. These cultural pursuits would later play a significant role in his life, as he became a patron of the arts and worked to preserve and promote Irish culture.

Brian Boru's military career began in earnest in the year 976, when he led his clan, the Dalcassians, in a successful battle against the King of Connacht. This victory earned him a reputation as a skilled warrior and leader. 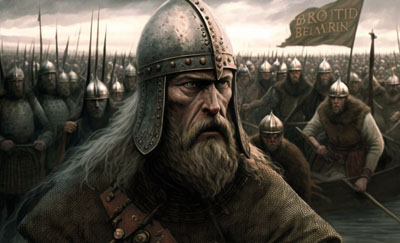 Over the next few years, Boru continued to expand his power and influence through a series of military campaigns. He defeated the King of Leinster and the King of Munster, and eventually became the High King of Ireland in 1002.

As High King, Boru worked to bring peace and stability to the country. He fought against the Vikings, who had been raiding and settling in Ireland for centuries. In 1014, he led his army in a decisive victory against the Vikings at the Battle of Clontarf, which ended the Viking threat in Ireland.

In addition to his military achievements, Brian Boru is also known for his efforts to unite the various Irish clans and kingdoms under his rule. He worked to establish a centralized government and create a sense of national identity among the Irish people.

Boru's efforts to bring peace and unity to Ireland were not always successful, however. There were factions within the Irish nobility who opposed his rule, and he faced several rebellions during his reign. Despite these challenges, Boru was able to maintain his power and continue his efforts to unify the country. 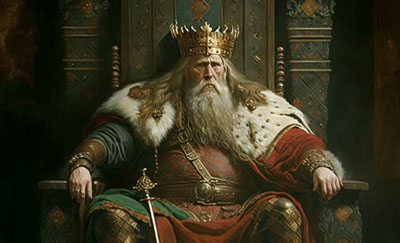 Brian Boru married twice in his lifetime. His first marriage was to Gormlaith, the sister of the King of Leinster, in the year 999. The marriage was seen as a way to solidify Boru's alliance with the Leinster clan and bring peace to the region.

Boru's second marriage was to Echrad, a princess from the clan of Uí Briúin. This marriage likely took place sometime after 1012, as Echrad is not mentioned in historical records until that year. It is unclear if Boru and Echrad had any children together. 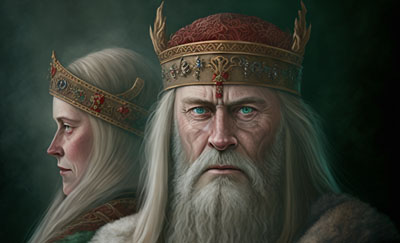 Brian Boru is known to have had at least three children from his first marriage to Gormlaith. His oldest son, Donough, inherited the title of High King after Boru's death and ruled until 1023. Boru's other two children with Gormlaith, Conor and Tadhg, also had significant roles in Irish politics and military affairs.

Boru's children played important roles in shaping the political landscape of Ireland after his death. Donough's rule as High King was marked by conflict and turmoil, as he faced several rebellions from rival clans. However, Boru's other children, Conor and Tadhg, were able to maintain their power and influence in the country for many years.

Brian Boru's death is one of the most well-known and controversial events in Irish history. According to the historical record, Boru was killed in the Battle of Clontarf, which took place on April 23, 1014.

The Battle of Clontarf was fought between Boru's Irish forces and a coalition of Vikings and Irish rebels who opposed his rule. Boru's army was ultimately victorious, defeating the Vikings and driving them out of Ireland. 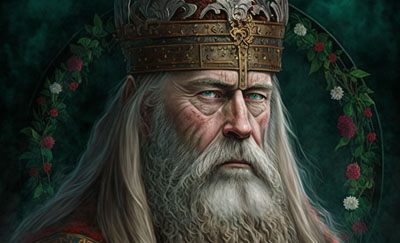 Brian Boru's legacy is one of strength, leadership, and national unity.

Boru's death marked the end of an era in Irish history. His death is still remembered and mourned by the Irish people, and he is celebrated as a national hero.

Brian Boru is remembered as one of the greatest kings in Irish history, and his legacy has had a lasting impact on the country. He is celebrated for his military successes, particularly his victory at the Battle of Clontarf, which ended the Viking threat in Ireland.

Boru is also remembered for his efforts to bring peace and unity to the country. He worked to establish a centralized government and create a sense of national identity among the Irish people. His efforts laid the foundation for the strong, united Ireland that exists today. 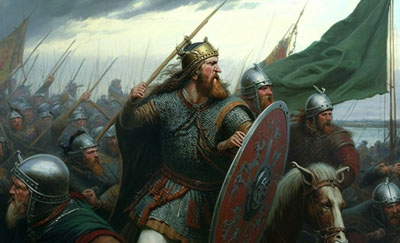 The famous Battle of Clontarf, where Brian Boru lost his life.

In addition to his political and military achievements, Boru is also remembered for his cultural contributions. He was a patron of the arts and is credited with helping to preserve and promote Irish language and literature.

Boru's legacy is still celebrated in Ireland today. His name is remembered in many place names and historical sites throughout the country, and he is a source of inspiration and pride for the Irish people. His memory is also kept alive through various cultural events and traditions, including music, literature, and drama.

Overall, Brian Boru's legacy is one of strength, leadership, and national unity. He is remembered as a hero and a pioneer, and his impact on Irish history and culture will be felt for generations to come.