She played a pivotal role in the 1916 Easter Rising and her exploits read of heroism, bravery and fearlessness. She stood side by side with the other patriots involved in the insurrection and her deeds have passed into legend.

Markievicz was appointed as Michael Mallin’s second-in-command at the St. Stephen’s Green/College of Surgeons garrison during the Easter Rising and is undoubtedly one of the most charismatic figures of the rebellion. As well as being the highest profile female member of the Rising, she managed to stand out even further through her colourful dress sense which included green puttees and tunic, a slouch hat with an ostrich feather and riding breeches. In addition, she was normally seen with a weapon in her hand. 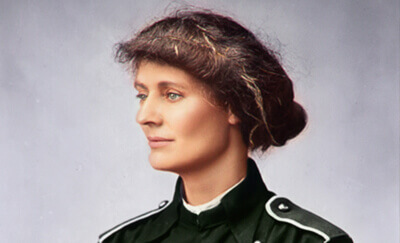 We have brought this image to life by retouching and colourizing. Click on the image to view in full.

Alongside her dress sense which was deemed unusual for a woman in the era, the Countess also enjoyed smoking cigarettes which was believed to be unladylike. Her fashion and behaviour only added to her increasing notoriety.

Below, we reprise her role in the rebellion while also providing some background and finally, taking a look at her other accomplishments.

Despite the exotic name, Countess Markievicz was actually born Constance Gore-Booth in 1868 in London. For the first four decades of her life, she subscribed to the more ‘traditional’ lifestyle associated with women in the era where she attended high society social events. Her family were wealthy landowners with a large estate in County Sligo.

Initially, young Constance wished to become an artist and even studied art at London’s prestigious Slade School in 1893. Five years later, she switched to the world famous Julian School in Paris and it was here where she met Count Casimir Dunin Markievicz. At that time, he was married but his wife died in 1899 and the wealthy Polish count married Constance in 1901; she became known as Countess Markievicz from that point on.

In 1903, the couple moved to Dublin where the Countess gained a reputation as a landscape artist. Two years later she founded the United Artists Club and seemed set to spend the rest of her life following her passion for art. However, in 1906 something happened which changed everything and led her on the path which saw her inscribed in history forever.

The Beginning of the Rebel Countess

The Countess had rented out a small countryside cottage outside Dublin to poet Padraig Colum in 1906. He left behind copies of a publication entitled ‘The Peasant and Sinn Fein’. The contents related to the push for independence from British rule and the Countess was taken in by the revolutionary text.

Within two years she became immersed in nationalist Irish politics and quickly joined Sinn Fein and a woman’s movement by the name of Inghinidhe na hEerann (Daughters of Ireland). She also stood for parliament in 1908 in Manchester but was defeated. 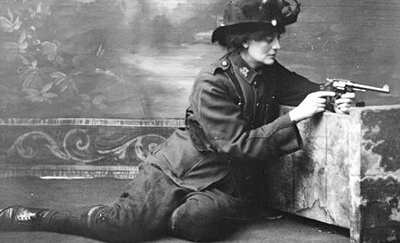 Unperturbed, she founded Fianna Eireann in 1909; this was a kind of military boy scouts’ movement with use of firearms encouraged. According to Padraig Pearse, this movement was as important as that of the Irish Volunteers which was founded four years later.

The Countess had her first taste of jail in 1911 when she was imprisoned for her involvement in the demonstrations during the visit of King George V. During the Lockout of 1913, she set up soup kitchens in order to feed those unable to afford food.

Additionally, she played a major role in the establishment of Cumann na mBan (an organisation for Republican women) in 1914 and by the following year she helped to organise and train the Irish Citizen Army (ICA) which was led by James Connolly.

Plans for the Rising began long before the event; the Countess and Connolly reportedly looked to seize Dublin’s Mansion House as early as 25 September 1914. H.H Asquith and John Redmond were addressing an army recruitment meeting but when it was found that soldiers were also there, the plan was abandoned.

Yet on the very same evening the duo addressed a large meeting at St. Stephen’s Green. The meeting was guarded by members of the ICA who had rifles and bayonets but no ammunition. Royal Irish Constabulary men were also at the meeting with weapons at the ready but thankfully no shots were fired.

Once World War I began, Countess Markievicz and Connolly bided their time waiting for an opportune moment to start an insurrection. The duo was believed to have begun the planning process from August 1914 but they had to wait until April 1916 before the Rising could finally take place.

What Connolly didn’t know was that the Irish Republican Brotherhood (IRB) was also planning a rebellion and had been considering an armed uprising since September 1914. He threatened to start the rising with the ICA if other parties didn’t act. Eventually, he met with the IRB leaders in January 1916 and they agreed to work together.

It was decided that the ICA, IRB and Irish Volunteers (a paramilitary group founded by Irish nationalists and led by Eoin McNeill) would participate in a joint insurrection during Easter 1916. McNeill was not trusted by the leaders of the rebellion so he wasn’t informed of the decision to fight until 21st April. McNeill issued an order to halt the Rising on Easter Sunday (23th April) and even placed it in the Independent newspaper. 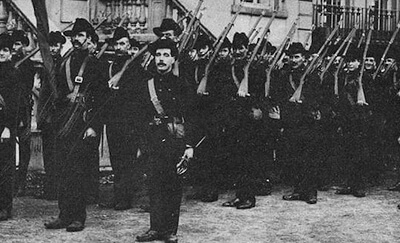 The Irish Citizen Army gather units to march on Stephens Green and dig trenches in preparation of the Easter Rising.

Despite this event, Connolly and the I.R.B leaders decided to proceed with the Rising to the delight of the Countess who wrote:

“Our heart’s desire was granted to us and we counted ourselves lucky.”

The rebels took up battle positions on Monday 24th April and the Countess was heavily involved. Prior to her arrival at St. Stephen’s Green, the Countess had delivered medical supplies to Sean Connolly’s ICA garrison at the City Hall.

When she turned up at the Green she was carrying a rifle. Initially, she was supposed to liaise between the Green and the GPO. However, Mallin asked her to stay because of the lack of followers (he was expecting twice the number he actually had) and persuaded her to become his second-in-command. The ever willing Markievicz took charge of trench digging duty.

From these trenches the Countess, Mallin and others came under heavy fire from snipers stationed in the Shelbourne Hotel. On Tuesday 25th April, Mallin decided their position was too vulnerable and he ordered the rebels to retreat into the College of Surgeons; the Countess led the troops into the building and is said to have shot the lock off the door with her gun.

For the rest of the week the rebels fought bravely despite the growing inevitability of defeat. By Saturday 29th April, Padraig Pearse realised the Rising was doomed to failure and decided to surrender unconditionally to the British in order to prevent further loss of life. The other posts did not surrender until news of Pearse’s decision reached them.

The garrison at the Green did not receive confirmation of the surrender order for several days but when it eventually came, the Countess was the first to see it. Although Mallin was initially reluctant to accept the order, he ultimately did so due to his high regard for James Connolly who it was said endorsed the order. Additionally, Markievicz walked around the garrison repeating “I trust Connolly, I trust Connolly”. 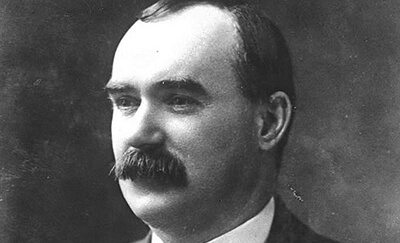 James Connolly was an Irish republican and socialist leader, aligned to syndicalism and the Industrial Workers of the World.

She accompanied Mallin when he surrendered to British Army Officer Major de Courcy Wheeler. It is said that when the Countess was asked to disarm, she kissed her revolver before surrendering it. This simple yet calculated gesture was one of the most memorable and celebrated of the entire Rising.

Countess Markievicz once again showed her bravery by refusing to abandon Mallin. She was offered safe passage in a car but decided to stand beside her commanding officer as they walked through a double line of enemy troops.

One of the more controversial aspects of Markievicz’s life was her alleged murder of Michael Lahiff, an unarmed police constable at St. Stephen’s Green. Although the identity of his killer has never been conclusively proven, a nurse by the name of Geraldine Fitzgerald claimed she witnessed the incident and named the Countess as the perpetrator. According to Fitzgerald, Markievicz ran into the Green and triumphantly said “I got him” while some of the rebels appeared to congratulate her on the deed.

Countess Markievicz was the only female member of the Rising to face a court martial. The prosecution tried to claim she ‘crumpled up’ during the trial on 4 May 1916 but official records tell a very different story.

According to historical sources, the Countess was dignified, courageous and defiant throughout the trial and said:

“I went out to fight for Ireland’s freedom and it does not matter what happens to me. I did what I thought was right, and I stand by it.”

Although she was found Guilty and sentenced to ‘Death by Being Shot’, she received clemency on account of her sex. As a result, the sentence was commuted to life in prison. 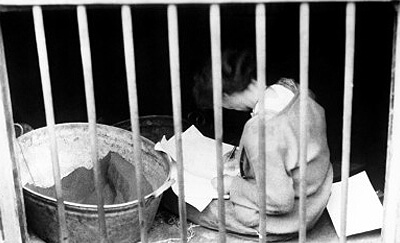 The Countess was sentenced to life imprisonment, but only served a total of 13 months in Ireland & UK.

The Countess served a total of 13 months in jail in Ireland and England. During her incarceration, she claimed that a signatory of the Proclamation, the executed Thomas Clarke, was her inspiration while in prison. For the duration of her life she lambasted Eoin McNeill, the Irish Volunteers Chief of Staff, because he not only opposed the Rising, he tried to prevent it from occurring.

During the December 1918 General Election, Countess Markievicz became the first woman to ever win a seat at Westminster’s House of Commons. However, as she was a member of Sinn Fein she followed her party’s lead and did not take her seat.

Instead she was Minister of Labour during the first Dail (April 1919-1921). She was also the head of Cumann na mBan at this point and stridently opposed the December 1921 Anglo-Irish Treaty. The Countess also supported the anti-Treaty side during the Civil War. Towards the end of her career she joined Fianna Fail which had Eamon de Valera as leader, another rebel who managed to avoid execution.

Countess Markievicz died in 1927 in a Dublin hospital. It is a measure of the woman that thousands of working class people lined the streets during her funeral procession.