Wherever it was found, the Tara Brooch stuns viewers with its tiny details, intricately designed and executed in an astonishing presentation. Less than nine centimeters in diameter, the pseudo-penannular brooch nonetheless contains 76 patterns on its surface. Nearly every technique known to be used by metalworkers and jewelers in the eighth century is shown on this one singular piece.

The multiple skills and levels of mastery are clearly portrayed in the minute designs on both faces of the ring, the inner and outer edges, and even on the cord.

Thin delicate strands of copper are set against gold and silver in the brooch, displaying complicated Celtic knot work, all the more impressive because of the small size. The front of the piece is ornamented with fine gold filigree panels, each containing motifs of animals or abstract designs. Miniscule studs of amber, enamel, and glass separate the panels. The cord, used to secure the brooch to a cloak, is decorated with an elaborate pattern of animal and human heads amongst the shape of a serpent. 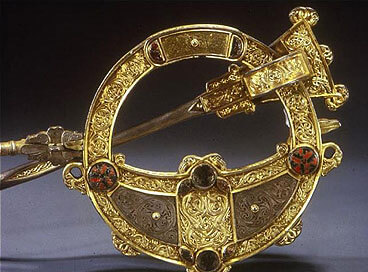 The front of the brooch is ornamented with fine gold filigree panels, containing motifs of animals or abstract designs.

Examples of La Tène decoration from the Iron Age are evidenced in the scrolls and spirals of some of the motifs, while chip carving, a technique often seen in Germanic jewelry was used in the creation of elegant birds on the piece. In one two-centimeter panel, a wee animal sits with a raised front paw and a winding body. There are also fantastical creatures that seem to be dragons littered throughout. Obviously a culmination of various areas of expertise, the Tara Brooch must have been made for an individual of very high rank.

History of the Brooch

Brooches were often used to fasten cloaks that would have been worn over tunics. This style of dress continued into the Middle Ages, inspired from the images of emperors in Rome, and many elite officials and people adopted this fashion. In Ireland, at the time the Tara Brooch was made, men and women of high status possessed such jewels to wear with their clothes and Jesus and the Virgin Mary were depicted with brooches similar to the Tara Brooch in art and high crosses.

The piece is an integration of Christian traditions and pre-Christian beliefs, as legends revolving around brooches can be spotted throughout Irish folklore. The Tara Brooch, however, was most likely made for a wealthy patron desiring a piece to show off his status, and contains no religious motifs. It is the most dazzling, and certainly the best-preserved brooch of over 50 pieces found throughout Ireland. No brooch is exactly like another, though they are similar in style and they all contain precious metals and semiprecious stones.

Although it sports the name of Tara, this brooch has nothing to do with the Hill of Tara, where the High Kings of Ireland resided. George Waterhouse, who was producing Celtic Revival jewelry in Dublin, named it in the 19th century to be more charming to the public. He had purchased the treasure from the watchmaker who had, in turn, bought the brooch from the mother of the two sons in Bettystown. Waterhouse made it the centerpiece of his displays at his Dublin shop, where he sold replicas of jewelry featuring Celtic designs. He also presented the Tara Brooch at The Great Exhibition in London in 1851, sent it to Queen Victoria to inspect at Windsor Castle, and then showed it at the Paris Exposition Universelle in 1855.

A Brooch for Kings

In the 1870s, the Tara Brooch came to be housed in what is now the National Museum of Ireland in Dublin, where it now rests for the public to see. It entered this collection from the Royal Irish Academy who transferred this and many other antique treasures to the Museum. Although this brooch is the original, the term ‘Tara brooch’ has become a generic term referring to brooches inspired by the Celtic Revival. In the late 19th Century, copies of the Tara Brooch were highly sought after, and Inghinidhe na hÈlreann, a nationalist organization, made imitations of the brooch to be membership badges. Thus, the discovery of the Tara Brooch and its subsequent popularity encouraged a cultural revival that was already beginning to take place.

Celtic brooches in general have become symbols of the culture that flourished in Ireland and the British Isles in the Early Medieval period. They usually have a long, movable pin attached to a ring. The pseudo-penannular type, like the Tara Brooch, has a closed ring with two separate terminals and is normally less efficient at fastening cloth than the penannular style. Men normally wore a brooch at the shoulder while women would attach theirs at the breast. 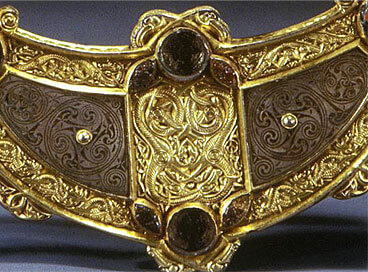 Believed to have been made around 700 CE, at the pinnacle of the culture, the Tara Brooch is now a symbol of Celtic Christianity.

The code of law in Ireland states that if a brooch is worn in one of these traditional ways, the wearer is not at fault in the event that another person receives an injury from the pin. An earlier law also specified that gold brooches with crystal were to be worn by the sons of major kings, while the sons of minor kings should wear only silver brooches. Most brooches were individually designed, but the Tara Brooch is the most ornate and detailed of any others that have been unearthed from this period.

The original Tara Brooch has become a representation of the achievements of metalworkers in the early Medieval Age, and a stunning display of Insular art. Believed to have been made around 700 CE, at the pinnacle of the culture, the Tara Brooch is now a symbol of Celtic Christianity during Irish monasticism. It joins such treasures as the Book of Kells, Lindisfarne Gospels, Ardagh Chalice and the Derrynaflan Paten, as a cherished example of the sophistication and artistry in Celtic history.