Tales of these invasions can be found in the Mythological Cycle that also contains tales of Irish gods and goddesses. The trouble with the Mythological Cycle is that it was passed down orally and never written down so it is hard to discover the truth. Though stories of the five waves of invasion were eventually written in AD 1100, this is approximately a millennium after these events occurred. 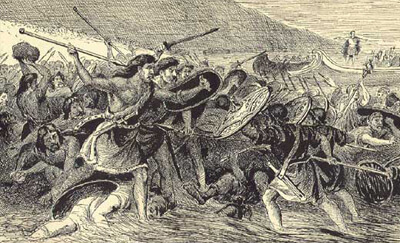 The existing tales of the invasions are laden with myth and magic and while there may be an element of truth, much of what is written is speculation.

The monks who recorded the tales did whatever they could to find out what really happened but after so much time, facts had been altered. The existing tales of the invasions are laden with myth and magic and while there may be an element of truth, much of what is written is speculation. Nonetheless, here are the five waves of invasion of Ireland for your reading pleasure.

This wave was named after the conquering leader, Partholan. He was by all accounts a villain who killed his parents and destroyed his homeland before arriving in the region surrounding Dublin. According to legend, Ireland was also known as the land of the Happy Dead and Partholan came over with Dealgnaid, his queen. It was said that Ireland was a much different country then with a single plain, nine rivers and three lakes though the country developed a little during the time of the Partholanians.

A gigantic yet deformed group of violent people called the Fomorians were the main rival of the Partholanians and they fought viciously for control of the island. Eventually, it is believed that the Partholanians gained the upper hand and drove the Fomorians out to sea. However his clan did not get to stay long enough to make wholesale changes to the country as the conquering crew was all wiped out by plague within 40 years of arriving.

This wave is also named after its leader, Neimheahd, who led his people to Ireland from Scythia. The Nemedians sailed for Ireland in a fleet of 32 ships but spent 18 months on the seas where almost all of them perished. Slowly but surely, the Nemedians managed to grow their numbers beyond 8,000 and settled in Ireland. Once again, the Fomorians were the main enemies of the new conquerors and Nemed defeated them on many occasions. However, when he died from a plague which also killed several thousand of his people, the Fomorians gained power.

This seemed to be a brief victory for them as three Nemedian chiefs revolted and the leader, Fergus, killed the Fomorian leader Conann. Yet the Fomorians regrouped and annihilated their foe. There were only 30 Nemedians left and they fled Ireland.

The third wave arrived just over 200 years after the last Nemedians left. Legend has it that the Fir Bolg were slaves that had escaped from Greece and they introduced agriculture to Ireland. It is also believed that the Fir Bolg also brought the rule of law and a host of social institutions to the country. The name means ‘Men of the Bags’ and refers to the Fir Bolg practice of carrying leather bags of earth from fertile valleys to the rocky hills in Greece. 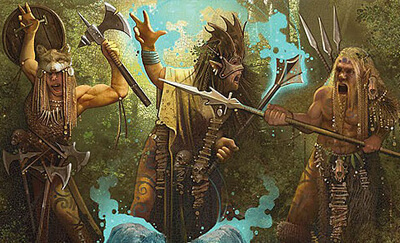 The Fir Bolg were slaves that had escaped from Greece and they introduced agriculture to Ireland.

Some stories suggest that the Fir Bolg actually came from Spain and were one of three groups that were all given the same name. While this was a benevolent wave, the Fir Bolg were not a great military power and were easily defeated at the First Battle of Mag Tuired by the Tuatha De Danann.

Unlike the other invasion waves which came via the sea, it is said that the Tuatha De Danann arrived by dark clouds in the air. Irish mythology paints the Tuatha De Danann as a people with magical powers and they ruled Ireland for many years. Like the other waves before them, the Danann had to contend with the Fomorians but they were far too strong for their foe and never allowed the Fomorians to gain a foothold in the country.

The Danann are known for bringing four magical treasures which feature in various Irish mythological stories: The Spear of Lugh, The Dagda’s Cauldron, The Stone of Fal and the Sword of Light of Nuada. The Danann were to rule Ireland until the arrival of the Milesians. 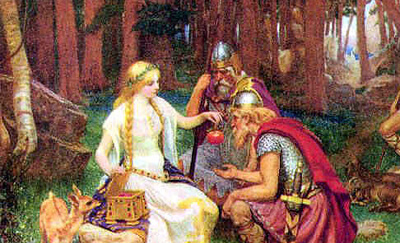 Irish mythology paints the Tuatha De Danann as a people with magical powers and they ruled Ireland for many years.

The Milesians were Celtic and came over to Ireland from Central Europe where they had already established a foothold. A man called Ith saw the coast of Ireland while he was in Spain and vowed to conquer it. Legend says that his timing was perfect as Neit, king of the Danann, had just been killed in yet another battle with the Fomorians and there was a great deal of confusion. Ith was captured by the Danann and put to death but the rest of his crew survived and went back to Spain where they plotted revenge.

A major battle took place in Ireland at Telltown and the Danann were defeated. However, the Danann were not completely dispelled and an agreement was reached whereby the Danann ruled the spirit land while the Milesians ruled the physical realm.

While the five waves of invasion are not to be taken seriously in a historical context, these tales of filled with symbolism. If nothing else, such tales give us an idea of the ethics of war in Ancient Ireland and are also the basis of Irish Fairy Faith.