As all of the men in Ulster have been stricken by a curse that prevents them from fighting, the legendary hero Cú Chulainn (then a 17 year old boy) must face the Connacht army single-handed.

According to legend, the Cattle Raid of Cooley took place in the first century AD and featured Medb, the queen of Connacht. The story began innocuously enough with her husband boasting that Medb was wealthier now than before the marriage. As she was the daughter of the High King of Ireland, this offended her greatly. After a squabble which involved the comparison of riches, it was found that Ailill had a magnificent white bull which Medb could not match.

She asked her messenger if there was a bull in Ireland that could match this white bull and was told that Donn Cuailnge was by far the best in Ireland. One problem was that the bull belonged to the powerful Daire of Cooley in the province of Ulster. Medb immediately sent a messenger to Ulster to ask for a loan of the bull for a year.

Donn Cuailnge was by far the best bull in Ireland but he belonged to the powerful Daire of Cooley in the province of Ulster.

Medb offered 50 heifers, land in Connacht, a chariot and her friendship for the loan and Daire readily agreed. He threw a lavish feast to celebrate this new arrangement but some drunken members of Medb’s group were overheard saying that Daire was wise to give up the bull or else it would have been taken by force. An irate Daire rejected the proposal and sent the Connacht representative’s home empty-handed.

When Medb learned of this volte-face, she immediately assembled an army and vowed to attack Ulster to teach Daire a lesson in respect and also to take Donn Cuailnge. With the added strength of Ailill’s armies and the fact that Ulster warriors were stricken by the curse of the Pangs of Ulster, Medb was certain that victory would be hers. However, she received a dire warning from a fortune teller called Fedelm who said that a young warrior called Cú Chulainn would destroy the armies of Connacht.

Unfortunately, Cú Chulainn was not on watch when the Connacht army arrived and they took the Ulster forces by surprise. However, once he returned, he waged guerrilla warfare on Medb’s men and picked them off one by one. He killed with his slingshot and also slaughtered soldiers that became separated from the group. Medb offered him money and land in a bid to get Cú Chulainn to change sides but he refused. However, he did promise to stop attacking her men if she could find someone to defeat him in single combat.

Medb agreed because she was certain that one of her great warriors could beat this teenage boy but she was mistaken as he defeats every single man thrown at him. Medb called on the legendary Fergus, stepfather of Cú Chulainn to fight but once on the battlefield, Cú Chulainn agreed to yield to a reluctant Fergus so long as his stepfather returned the favour in future. 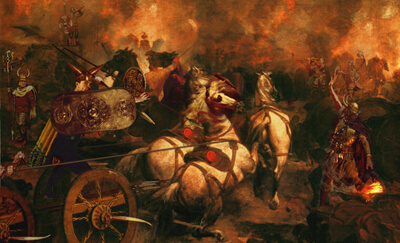 Ferdia, Cú Chulainn’s foster brother, was involved in an epic five day battle with the mighty Cú Chulainn before finally being slain.

Only Ferdia, Cú Chulainn’s foster brother, was a credible threat to the great warrior but Ferdia did not want to fight. Medb threatened to ruin his reputation and spread word throughout the kingdom that Ferdia was a coward but this failed. Even getting Ferdia drunk and promising marriage to Medb’s daughter was not enough. It was only when she claimed that Cú Chulainn dismissed Ferdia’s chances of victory did he relent and agree to take on his brother.

As both were trained by Scáthach in Scotland, they were evenly matched and a titanic battle took place. Ferdia had super tough armour that no ordinary weapon could pierce while Cú Chulainn had the Gae Bolga, a special spear that required a unique technique that only he knew how to perform. After five days, Ferdia appeared to have gained victory by piercing his brother’s chest with a sword but Cú Chulainn unleashed the Gae Bolga and it penetrated Ferdia’s armour and killed him instantly.

Cú Chulainn was exhausted and sought a rest and while Medb finally got hold of Donn Cuailnge, she was trapped in Ulster where the warriors were recovering from their pangs. Cú Chulainn initially did not take part in the battle but his fighting spirit would not allow him to sit idly by so he rose despite not being fully healed and went into battle again. He met Fergus and reminded him of the promise made during their previous meeting. Fergus was a man of honour so he agreed to yield and took his 3,000 men with him.

This meant that Ailill and Medb had to rely on their armies and now the queen realised she could not win the battle. She launched into a full retreat and sent Donn Cuailnge back to Connacht and believed she had secured the bull permanently. 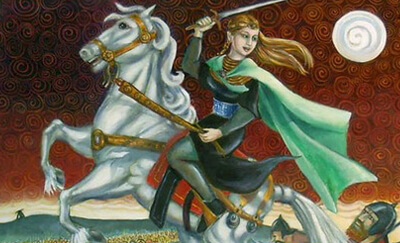 Medb and Ailill made peace with Ulster and a peace treaty ensured neither side engaged in battle against the other for seven years.

Battle of the Bulls

The legend then says that Donn Cuailnge fought Ailill’s white bull on Tarbga, a hill known as the place of ‘bull grief’. A man called Bricriu was chosen to judge the battle but he was trampled and gored to death during the spectacle which lasted a full day and night. Eventually, Donn Cuailnge emerged victorious and he scattered the remains of his foe all over Ireland over a two day journey. He returned to Ulster where he died having secured his reputation as the finest bull in Ireland.

After a war that cost thousands of lives, Medb and Ailill made peace with Ulster and a peace treaty ensured neither side engaged in battle against the other for seven years. Both sides returned to their respective lands and the warriors of Ulster were filled with triumph while Cú Chulainn had taken the first steps towards becoming a legend.

Outside Groupon's office in Dublin, Ireland there is a tall statue of Queen Medb (Maeve) of Connaught.