His uncle, the king of Ulster, was Conor MacNessa who had a band of warriors, known as The Red Branch Knights and Setanta wanted more than anything to be a member of this elite group. Since he was a small child, Setanta had shown almost superhuman abilities of magic, poetry, wisdom and warfare, when he was still quite small he told his mother that he wanted to be a member of The Red Branch Knights. Of course, Dechtire told the young boy he was too young. 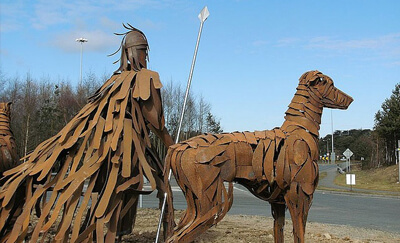 Setanta had a happy childhood and enjoyed playing the game of hurling with his friends. This is the national game of Ireland and is similar to lacrosse or hockey. His team were very good at the sport and always won. When he was ten, he approached his father and told him he wanted to join The Red Branch Knights, again he was told he was too young, so he stayed helping his parents by carrying water to the house, chopping wood and milking the cows.

One night a story teller arrived at Setantas' home, he told of the exploits of King Conor and his Red Branch Knights and while everyone slept, Setanta left for King Connors castle taking his hurling stick and ball with him. It took him a long time to get there because it was a great distance, but there was a hurling match in progress when Setanta arrived and he joined in. The other players were jealous because he was such a skilled player, after the match he went to find King Connor and asked if he could stay and to his delight, the king agreed.

After some days had passed, the king asked Setanta if he would like to accompany him on a visit to Culains house where a party was being held. Setanta thanked the king and told him he would come later as he had to play in a hurling match. Later on Setanta arrived at Cuilans fort and outside guarding the premises was Cuilans ferocious guard dog. This dog was well known as being the biggest, most ferocious, meanest and most fearsome guard dog in the whole of Ireland and it immediately attacked Setanta, who took his hurling stick and killed the dog with one blow.

The Hound of Cuilan

Hearing the commotion, Cuilan rushed out and was relieved to find the boy uninjured, but was naturally upset about his dog. He told Setanta that the dog had been the best guard to his fort he had ever had, so Setanta offered to guard do the job himself until the dog could be replaced. He told Cuilan that he would be known as "The Hound of Cuilan" which translates to Cuchulainn.

Over the next few years, Cuchulainn, as Setanta became known achieved high status in the Red Branch Knights. He grew to be a very handsome man and was popular with many of the local girls, but Cuchulainn fell in love with Emer, the daughter of Lord Forgal, the Wily, Emer refused to marry him until he had acquired even greater status in the Red Branch Knights, so Cuchulainn then went to the Isle of Sky and trained for many years with the warrior goddess Scathatch. 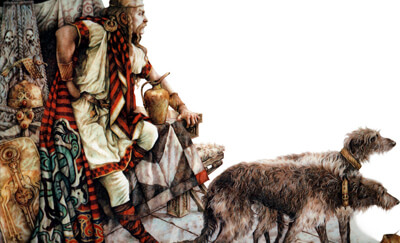 Cuilan would be known as "The Hound of Cuilan" which translates to Cuchulainn.

Finally, having completed his training Cuchulainn returned to his homeland and found Ulster under attack by the Nechnan warriors, turning into a berserker, he killed them all and made his way to the fort of Forgal the Wily. Forgal was displeased at the idea of Cuchulainn marrying Emer and locked her away in a tower but the determined warrior broke into the tower, rescued Emer and ran away with her to get married.

Cuchulainn fought in many more battles and was eventually killed during one of them, but his fellow warriors propped him up against a large rock with a spear in his hand and a shield on his arm looking ferocious enough to terrorize his enemies even after he died. He was later avenged by Conall the Victorious and to this day his exploits are talked of.

Considered by many to be the greatest Celtic warrior hero of medieval Ireland, Cuchulainn was brave and strong, and knew how to fight. He rescued the girl from the tower and had his death avenged, he was the perfect hero of legend. 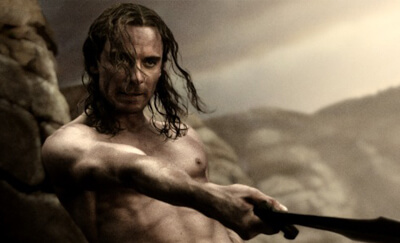 Michael Fassbender is said to be determined to bring Cuchulainn to the big screen.

In the twelfth century Book of the Dun Cow, Cuchulain is summoned from hell by St. Patrick to describe the terrors of hell to the pagan king of Ireland Laery MacNeill. As a result, the King was converted to Christianity and Cuchulain allowed to enter heaven.