Born to Cumhall, the leader of the Fianna, Fionn mac Cumhaill followed in his father's footsteps to become leader in his stead. The Fianna were the special guards charged with keeping the High King's person safe from all attackers, and some have said that the story of the knights of the round table draws its inspiration from Fionn's leadership of the fiercely loyal Fianna. 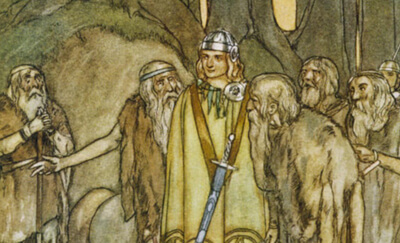 Fionn mac Cumhaill - No matter his form, he is strong and true - the consummate hero of the Irish lands.

Fionn mac Cumhaill had famous wisdom, and was even acknowledged as a seer. A fascinating tale tells of how he gained this enigmatic power. Residing by the Boyne River, Fionn's master Finneces finally caught the salmon of knowledge which he had been waiting to catch for many years.

Legend tells of Fionn mac Cumhaill's defeat of the terrible fire-breathing musician Aillen, who would come each year to burn Tara. With his skillful playing, Aillen put every guard into a deep sleep, then blew fire from his nose and destroyed the palace. Fionn finally defeated him by using a spear from his father's bag of magical weapons. Fionn stuck his own spear into his forehead so that the pain would make him unable to slip into slumber. He then struck down Aillen with the spear, causing him to be appointed leader of the Fianna as reward for his courageous act.

Stories which paint him as a giant weave an even grander tapestry. Fionn's legend holds that he tired of getting his feet wet when he traveled between Ireland and Scotland. He therefore threw rocks into the water to form the Giant's Causeway. With his indomitable strength, he also picked up a piece of Irish soil to throw at an enemy, but the missile missed its mark and fell into the Irish Sea. This is how the Isle of Man and Rockall were formed. 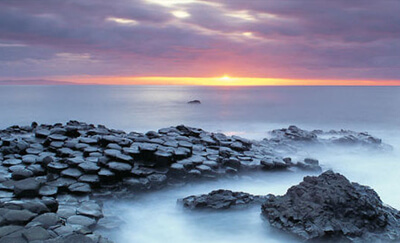 Fionn's legend holds that he tired of getting his feet wet when he traveled between Ireland and Scotland.

The love life of Fionn mac Cumhaill is just as storied. Fionn was hunting a doe in the woods, and his hounds Bran and Sceolan saw that he was in fact chasing a human who had been cursed by a druid for turning down his marriage proposal. Fionn brought the deer back to his land, and upon crossing onto his property, she regained her human form. Thus Fionn was wed to Sadhbh, and today even jewelry forms of Fionn's hounds are made to recount this romantic tale.

The legends of Fionn mac Cumhaill form a rich tradition of Irish gallantry and courage. His story will continue to live on in the imaginations of its hearers for generations to come.

The death of Fionn MacCumhaill is shrouded in mystery. One legend suggests that he is not dead but merely sleeping in a cave under Dublin, ready to strike back against Ireland's enemies.