Fionn's father was a warrior and young Fionn was also training to become one. To increase his learning he went to live with a poet named Finegas, this was the custom in those days, poets were considered to be wise men who could teach the young men the ways of the warriors. Finegas was known to be one of the wisest men in Ireland, he had read books as well as written poetry.

Finegas lived close to the River Boyne and had heard stories that the ancient druids had claimed that there was a remarkable salmon living in a still pool shaded by a magical hazel nut tree. The salmon had eaten the hazel nuts and they had passed on to him all the knowledge of the world. 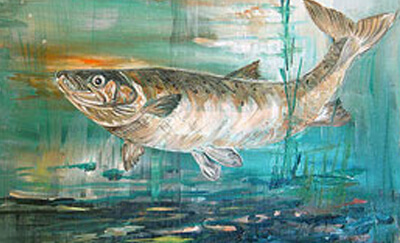 "The salmon had eaten the hazel nuts and they had passed on to him all the knowledge of the world."

The druids prophesied that anyone catching and eating the salmon would acquire all that knowledge for themselves. Many had tried and failed to catch this golden skinned, magical fish, but Finegas was fascinated by the legend and spent many years attempting to catch the wiley old fish known as the Salmon of Knowledge and so become the wisest man in the world.

Catching the Salmon of Knowledge

One day, Finegas saw the biggest salmon he had ever seen swimming in the River Boyne, realizing that this was the famous fish, he immediately tried to catch it in his net, but he tried to avoid looking into its eyes as the story told that anyone doing so would fall deeply asleep, suddenly the salmon leaped into the air and Finegas could not avoid its gaze and immediately fell fast asleep.

By this time, Fionn had seen what was happening and quickly woke Finegas before the salmon escaped. This time he was prepared and asked Fionn to fetch him a cloth to cover his eyes. For hours he tried to catch the Salmon of Knowledge and finally, after a long and frantic struggle, just as night fell, he succeeded.

Too exhausted to cook the salmon, he asked Fionn to do it, but warned him not to eat any of it, not even the smallest taste. Fionn agreed and cooked the fish over a fire, when he was about to serve it to Finegas he noticed a bubble in the skin and without thinking, broke it with his thumb. It was so hot he was burned and he quickly put his thumb in his mouth to ease the pain. When he took the fish to Finegas, the old poet noticed something different about his young pupil, a wisdom which had not previously been there.

He asked Fionn if he had eaten any of the salmon and he truthfully denied it, but explained how he had burned his thumb on the fish and had sucked it to help the pain. Finegas realized that it was in the blister on the skin of the fish that all the knowledge had been and that Fionn had acquired it, he was disappointed, but accepted that this was Fionn's destiny.

Fionn burnt his thumb and immediately placed it in his mouth, passing on all the worlds knowledge.

So it was that when Fionn grew up, he became a great warrior, a wise poet and leader of the Fianna the most heroic and memorable warriors in the history of Ireland.

According to legend, an ordinary salmon ate nine hazelnuts that fell into the Well of Wisdom (aka Tobar Segais) from nine hazel trees that surrounded the well.