Seal people are said to be cursed with a constant longing for what they do not have: when they are swimming in the water as seals, they yearn to be on land, and when they walk on two legs as a human, they long to be in the sea. They can transform from one creature to another by shedding their sealskin, and alternatively, putting it on again.

There is one ancient Celtic story featuring Neil Mac Coddrum, a Scottish fisherman. He was traveling along the coast when he spotted a group of nude women dancing under the moon. When he stepped on a piece of driftwood, he alerted his presence to the women who ran over to a pile of furs, slipped them on and dove into the sea. However, Neil Mac Coddrum was able to grab the last sister’s sealskin before she could put it on. Although she pleaded with him to give it back to her, Neil knew about selkies from the old tales and he refused. He hid her sealskin and the woman was forced to stay with him and become his wife. 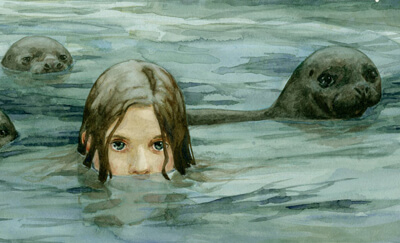 They can transform from one creature to another by shedding their sealskin, and alternatively, putting it on again.

After some time, she gave Neil a son and a daughter, both sporting webs between their fingers and toes. They grew older as the selkie woman grew more wistful, though she was a good and obedient wife. One day, the children came running to her with a piece of fur, excited to show her what they had found. Their mother was overjoyed to have her sealskin back. She told her children about the Selkie race and then warned them that she had to leave them that very night.

After Neil had fallen asleep, the selkie woman took her sealskin to the water’s edge. She bade her children farewell but she told them that they would be able to hear her singing from time to time, as they were half-selkie themselves. Then, she slipped into the water and the children headed home. In the morning, Neil Mac Coddrum was saddened to hear his children tell him that their mother had returned to the sea. He missed her very much, but his children kept him company for the rest of his life, except for the nights when their mother’s song called them to come to her and swim through the waves.

There are many Celtic legends that tell of children being born with webbed fingers and toes, but none so famous as the Mac Coddrum siblings.

The Secret of Roan

In 1994 a movie was made about a young girl who goes to live with her grandparents in Donegal, Ireland. Many years before, her brother had been carried out to sea in a cradle and one of her relatives believes that he is being watched over by the seals. It turns out that there is a legend that one of the girl’s ancestors had married a selkie. The Secret of Roan Inish is an enchanting tale inspired by the gentlest of the fantastical creatures in Celtic mythology. 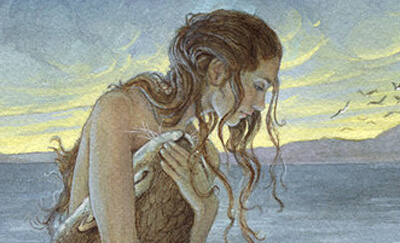 The Secret of Roan Inish is an enchanting tale inspired by the gentlest of the fantastical creatures in Celtic mythology.

Some of the legends say that selkies can only transform from a seal to a human once a year, on Midsummer’s Eve; others insist that it is every ninth night. The seal people, once upon the shore, were said to have danced in the moonlight. They are very gentle souls, contrasting with the usually hostile mythological creatures that come from the sea.

Selkies were also very beautiful. The women made very good, docile wives, if their husbands could manage to hide their sealskin. The male seal people had the power to seduce human women, especially those that were unhappy in their marriage. If a woman cried seven tears into the sea during high tide, the selkie would come ashore, shed his sealskin, and love her. Sometimes, these stories were told to explain why a woman had an affair or ran away from her family. There are also legends about women going missing at sea. It was said that her selkie lover had taken her down to his home underwater.

There is a debate about the origin of the legends surrounding selkies. There are suggestions that long ago, Spaniards had shipwrecked and washed ashore and that their dark hair reminded the people of seals. Another story says that seal people are really Finns that travel in kayaks and wear furs. Some people have said that selkies are fallen angels that dropped into the sea and transformed.

There is even a suggestion that after Christianity swept through the lands, the seal people were meant to represent those in purgatory, caught between two worlds. One of the most popular theories is that they were formed from the souls of drowned people who were granted one night each year to return to their human form and dance upon the shore of the sea.

It is widely speculated that, like many myths from all cultures, tales of selkies were created as a way to explain the unexplainable. There were children sometimes born with webbed fingers and toes, faces resembling that of a seal, and sometimes, scaly skin that smelled fishy. Today, there are scientific names for all of the above. Webbed toes is a hereditary condition called syndactyly, seal faces result from the rare medical phenomenon, anencephaly, and scaly skin probably existed from icthyosis, a genetic skin disorder. 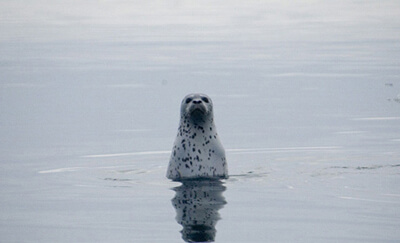 Stories of the seal people could also have been imagined as ways to account for women that did not fit in with the rest of society.

Stories of the seal people could also have been imagined as ways to account for women that did not seem to fit in with the rest of society. They share similarities with sirens, mermaids and mermen in other cultures. However, for people that lived on the edges of the seas and depended on the water and its gifts for survival, it seems natural for them to have believed legends of beautiful, mysterious creatures that shed their shiny seal coats to become humans for a night of dancing under the moon.

The sea is unpredictable, just like life had been for the ancient Celts. It is wild and tempestuous, but also can be calm, bountiful, and life giving. The seal people represent all that is gentle and loving about the vast waters, but they are also shape changers and can disappear without warning, making them the perfect characters to star in the romantic tragedies of folklore.

Irish animation studio Cartoon Saloon released an animated feature film based on the legend of the selkies entitled Song of the Sea in 2014.

Check out the wonderful Selkie Story by Andi Lee. Selkiestory.com