Dancing is a strong aspect of Ireland’s culture. The distinctive footwork is a novelty for outsiders and often draws exclamations of enjoyment. The show Riverdance is primarily responsible for making Irish dance widely popular in the last two decades. However, traditional Irish dances existed for centuries earlier. Read on to learn about this wonderful and expressive art form! 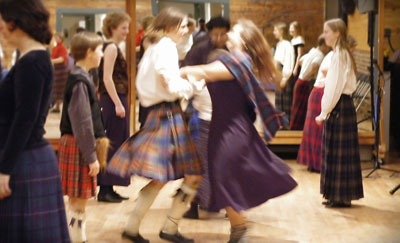 Ceili dancing traces its roots back several centuries to the start of the 1500s.

Ceili dancing traces its roots back several centuries to the start of the 1500s. It is a folk dance for several couples. Each couple dances together as well as with the group, often swapping partners. In ceili dancing, extended limbs and pointed toes are heavily featured.

The quadrille, a popular court dance was adapted into set dancing for rural areas. It typically requires four couples arranged in a square pattern. Two couples at a time then cross through the square to exchange positions. Unlike ceili, the dancers mostly use the entire flat portion of their feet, save for a few low kicks and flourishes.

Stepdance is an Irish dance for individuals or groups. Although it is sometimes danced in couples, this is not a requirement. In stepdance, the dancers keep rigid upper bodies. This specifically contrasts with their feet and legs that move through a succession of very fast hops, high kicks and complex footwork.

Riverdance is not a type of Irish dance. Rather, it is the name of a commercial stage show that features large groups of professional setdancers. Through dance, music, and light, the performance relates Irish stories to the audience. While the show originated in Ireland, it grew to tour worldwide.

Sean-nós is extremely distinctive by its footwork which tends to stay parallel and mostly touching the ground, as opposed to the other Irish dances. The upper body is also more relaxed, with swaying hips and arms. Improvisation is encouraged in Sean-nós, so it is far less formal or organized. This dance is also usually done individually.

Most traditional folk music in Ireland was specifically composed to be danced to. This is one of the reasons why it is so uniquely rhythmic. Instruments most often include bodhráns or other percussion, banjos, fiddles, accordions, pipes and flutes. Music used for traditional dances usually does not feature singing.

In earlier times, people simply donned their best clothes for dancing. Today, Irish dancers wear a variety of costumes for stage shows and competitions. Female dancers may wear dresses with a short hemline that are often decorated with Celtic knot work embroidery or sparkles. Solo dresses are form-fitting, with stiff skirts and long sleeves. Men might wear dancing trousers along with a button-down shirt and sometimes a vest. Dancers can wear soft shoes (for women), which are akin to ballet slippers, reel shoes (for men) that are somewhat like leather jazz shoes, or hard shoes which are similar to tap-dancing shoes. The shoes that a solo dancer wears are heavily influenced by the type of dance they are performing. Dances like the slip jig, the reel, or the single jig are ideal for soft shoes. On the other hand, heavy reels or treble reels require hard shoes to produce the loud tapping noises.

Irish dancing competitions are known as a feis (or feiseanna for several). It divides competitors by age range and experience. The dancers are not only judged according to their technical skill, but also for their stylistic movements, shoe sounds, and timing. There are plenty of dance competitions in Europe, as well as other areas such as the United States, Canada, and Australia.

In the 18th century rival dance masters would also challenge each other at local fairs – dancing until one collapsed from exhaustion.

Irish step dancing is believed to have evolved 2,000 years ago from dances that were performed by Celtic druids in celebration of oak trees and the sun.