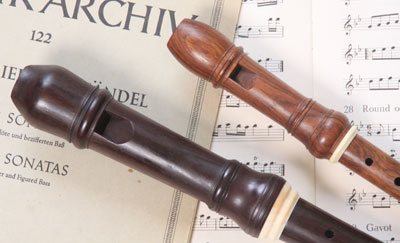 Composers, such as Bach, Purcell & Vivaldi used the recorder to imitate the sounds of birds.

The recorder grew in popularity in the medieval times and remained at the forefront of all woodwind instruments all throughout the Baroque era. However, the flute, oboe, clarinet, and other orchestral instruments replaced the recorder at the end of the 18th century. At the height of its popularity, people played the recorder at pastoral scenes, funerals, marriages, and at betrothals. Scholars have uncovered images of recorders in literary works associated with its time period. Famous composers, such as Bach, Purcell, Vivaldi, and Telemann used the recorder to imitate the sounds of birds in their music. In fact, this musical theme continued well into the 20th century.

Musicians revived the recorder in the 20th century in response to popular demand. Many people wished to hear historically accurate performances of early classical music. Due to its easy learning, instructors believe that students should start with the recorder before any other woodwind instrument. Unfortunately, this has given the recorder a bad name, because many people believe that only kids play the instrument. Contrary to popular perception, many professionals play the recorder at full solo range. In fact, the recorder produces a clear and elegant sound, mainly because of unusual harmonics not found in other instruments.

In contrast to the transverse flute, players hold the recorder outwards from their lips. The player's breath travels through a linear air stream where it becomes compressed by a channel carved into the wooden fipple of the instrument's mouthpiece. From there, the air stream passes through the windway and meets the labium, which causes the air stream to oscillate at the desired frequency within the resonator tube. The frequency of the sound waves is determined by the length of the bore. The length of the air stream and pitch produced varies by the position of each finger on its corresponding holes.

Recorders come in a variety of shape and sizes. Each recorder has its own register. Players tune their recorders in “C” or “F” since neither is the lowest note. Historically, some recorders were turned in “D,” “B flat,” “G,” and “E flat.” The alto recorder was tuned in “G,” and players still used it in Renaissance ensembles. The treble recorder, also known as the alto in the United States, is often used for solo music. The descant, also known as the soprano in the United States, is also used in solo music. In fact, classroom instructors mostly use the descant recorder to teach their students the basics of playing the instrument. Musicians rarely use the bass recorder in their orchestral ensembles.

The first English reference to the word recorder meaning a musical instrument appeared in 1388, when it was spelled ‘Recourdour’.

The Italian word for the recorder is ‘flauto dolce' which translates as ‘soft, sweet flute’.