Home> Celtic Resources> A Visitor's Guide to the Ring of Kerry

A drive along this trail throws forth spectacular scenic views with sandy beaches, a rocky shoreline, lakes, bogs, and numerous cliffs. Man made wonders include ancient monasteries and towering castles that have stood the watch like the sentinels of time. This circuitous route passes through towns such as Kenmare, Sneem, Waterville, Kells, Glenbeigh, and Killorglin, which all have their own specific spots of interest. 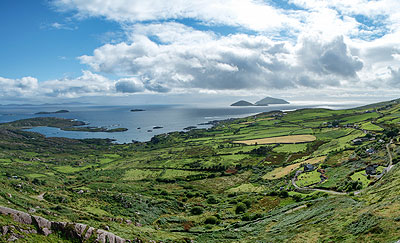 The Ring of Kerry is a 179km long circular tourist route in County Kerry, Ireland.

This route's features are on the itineraries of all tour companies in the region and it is a recommended must-see attraction for visitors to this part of Ireland. Since tour coaches traverse the route in anti-clockwise direction, tourists choosing to go by car are advised to travel the route in the opposite direction.

Cycling tours are quite popular on this route and most tour companies have packages suited for various budgets. The trail is located in County Kerry which is also the fifth largest in Ireland.

This is Ireland’s first ever national park, created in 1932, and is home to the famed Lakes of Killarney. Declared a biosphere reserve in 1981 by the United Nations Educational, Scientific, and Cultural Organization (UNESCO), Killarney National Park has many popular attractions within its boundaries. Muckross House and Gardens is a historic mansion located inside the park. Built in the early 19th century, the mansion is constructed in the Tudor style and has 65 rooms. The gardens around the mansion have exotic trees and colorful flowers including rhododendrons and azaleas.

Also located nearby is Muckross Abbey, a Franciscan friary built in the 15th century. Most of the buildings are in good condition while the graveyard located adjacent to it is still in use. The Torc Waterfall is a natural attraction located inside Killarney National Park and is a few minutes walk from the main road. Another landmark tourists won't want to miss is Ross Castle which was the home of an Irish chieftain in the late 15th century. This castle was recently restored and visitors can take a boat ride up to Innisfallen Island from here. This island houses Innisfallen Abbey which is believed to have been founded in the late 6th or early 7th century by St. Finian.

This little town located on a deep bay between the Macgillycuddy’s Reeks and the Caha Mountains has the distinction of being the winner and runner-up thrice in the 'Irish Tidy Towns' competition in the span of eight years from 2000. Kenmare was originally a plantation colony comprising primarily of English, Cornish, and Welsh protestants. The town got its present form in 1775 under the leadership of the First Marquess of Lansdowne. Remnants of that legacy can still be seen in the buildings and streets along this quaint town. 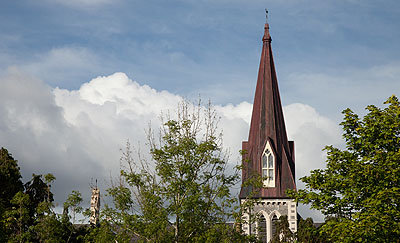 Located on the way to Glenbeigh town is the sandy Rossbeigh beach which is a designated natural heritage site. There is a playground where children can have fun while their parents set up a pleasant picnic lunch for the family to enjoy together. The town of Cahersiveen is situated halfway along the trail. The town houses the old Royal Irish Constabulary Barracks. The building has been restored and now has a restaurant, craft workshops, and a display of archaeological remains on its premises. The stone forts of Cahergall and Leacanabuaile are also located nearby. Ballycarbery Castle is yet another historic landmark that tourists to the region would not want to miss.

The Skelligs are two steep rocks located in the sea and the bigger of the two is a World Heritage Site. A 6th century monastery where Christian monks lived, is situated on Great Skellig or Skellig Michael. The smaller island is closed to the public because it houses the world’s second largest colony of gannets. Boats ply from Portmagee, Valentia, Cahersiveen, Derrynane, and Ballinskelligs to the islands from April to October.

The entire route offers opportunities to take in the spectacular views and click photographs. Tourists can choose to travel at their own pace along the Ring of Kerry, stopping as they wish. The numerous villages and towns along the trail also provide a wide range of choices in accommodation and meals for travelers. In short, the Ring of Kerry has something to offer everyone who visits.

These links provide more information about the Ring of Kerry as a tourist attraction:

Killarney, County Kerry is home to the highest mountain in Ireland – Carrantouhill, part of the mountain range called the McGillycuddy Reeks.