Highland bagpipes are so famous that they have long been synonymous with Scottish culture. They are made up of a main blowstick, various reeds and drones through which sound is emitted, and the main bag, which fills with air. When played well, the distinctive sound can evoke nostalgic images of Scotland. 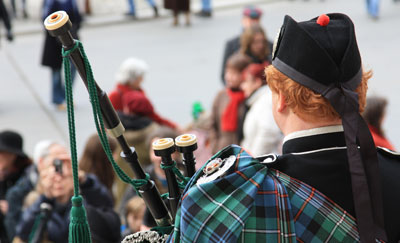 Bagpipes have been used for musical and even ceremonial purposes for centuries.

Bagpipes have been used for musical and even ceremonial purposes for centuries and are still used all around the world today. In some instances, modern groups have adapted bagpipes to their music, but traditional folk songs are still in high demand. Read on to find out more about this unique instrument.

In early times, Celtic lands spread right across Europe. In addition to this, their tribes often migrated and ventured to other areas. It is most likely that the bagpipes first originated among Celtic tribes, before being spread by them to other regions. This theory helps to explain the existence of different styles of bagpipes that have been found all over Europe, as well as in Arabian regions, Rome, Greece, and even in India.

During the Middle Ages, bagpipes were a common instrument in rural European regions, but its popularity introduced it to courts by the Renaissance era. Throughout these times, bagpipes were used for dances, as well as in military bands.

Bagpipes are an important icon of Scottish and Irish culture. However, the types of bagpipes for each of these regions do vary. Scots tend to feature Highland bagpipes, while the Irish use the Uilleann pipes. For both areas, these bagpipes are their national instruments.

They are played by everyone from street performers to pub bands, pipe and drum groups, and so on. Highland bagpipes are typically the most universally recognized bagpipes. Ironically, they gained this fame when Scottish Highlanders were recruited by British troops to join them in earlier battles.

In Scotland, Ireland, and many parts of England, bagpipes are commonly played at important ceremonies such as weddings, funerals, parades or processions, and military events. Outside of these areas, especially in Commonwealth Nations, bagpipes are also featured for similar ceremonies. This is more so if the people involved are of Celtic heritage, or if the organization has a Scottish or Irish background. 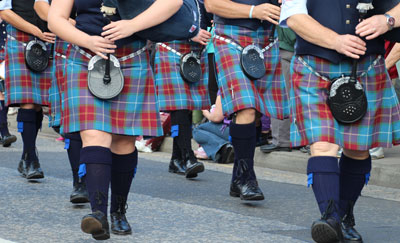 In Scotland and Ireland, bagpipes are often played at ceremonies such as weddings, funerals, parades etc.

Among the most popular songs are Amazing Grace and Scotland the Brave. The former was originally a hymn, which was recorded in varying versions several times. It was first recorded by a pipe and drum group in the early seventies, where it gained quick popularity. The second song is a very patriotic song for Scottish people, and it was most likely created near the early 1900s.

The bagpiper’s traditional costume starts with a tall hat covered in ostrich feathers. Over their torso, they wear a formal jacket, along with a length of tartan draped over one shoulder. The kilt, symbolizing the person’s clan, covers the area from the waist to just below the knees. It is held up by a belt, to which a sporran (a pouch covered in horse hair) is attached. Long socks or hose are worn over flashes (colored strips of fabric). Plain black shoes are worn and covered with spats, white gaiters that cover the tops of the shoes and rise up to the shins.

Finally, each piper also inserts a small dagger known as a skeandhus in the top of their right socks. It is symbolic of the hidden weapon that Highlanders would carry with them to be prepared against surprise attacks. A well-made costume can cost an average of $2000.

Buying a well-crafted set of bagpipes can be quite expensive. To start off, purchase a practice chanter instead. It is far smaller, and more affordable, making it easier for beginners. To start learning, the best way is to find a teacher so that you can learn in person. An alternative is to study from books and demonstrative videos. Do remember that learning the bagpipes takes a considerable amount of practice and patience.

The most common types are the Scottish Great Highland Bagpipe and the Irish Uillean pipes.

Bagpipes were once used by Scotts to frighten away their enemies on the battlefield.