Aoife was the second wife of the King of Lir and the sister of Eva, the King’s first wife. Eva had four children with the king but died soon after having her fourth child. The lonely Lir wanted a mother figure for his three boys, and one girl and Aoife fitted the bill. Legend has it that Aoife possessed magical powers. 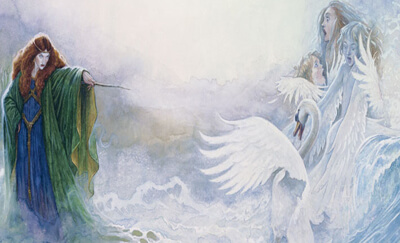 Aoife condemned the Children of Lir to live as swans for 900 years across just three locations.

Although she enjoyed life with the king and children at first, she soon grew jealous of the attention Lir bestowed on the kids. One day, when she went to a nearby lake with the children, she used her magic to transform the kids into swans. The children were condemned to live as swans for 900 years with equal time spent at Lake Derravaragh, the Straits of Moyle and the Isle of Inish Glora. The curse could only be ended when the swans heard the ringing of a bell; this would signify the arrival of Saint Patrick in Ireland.

However, the swans could still talk, so they sang beautiful songs to tell their father what happened. Lir arrived at Lake Derravaragh and spoke to Fionnuala who confirmed that Aoife was a witch who had placed the curse on them. The king was incandescent with rage and banished Aoife into mist; she was never seen again.

Angus mac Og (also spelled Aengus or Aenghus) was one of the Tuatha de Danann and was the Celtic god of youth and beauty. He is often depicted as having a group of birds flying around his head. According to legend, Angus was the son of the Dagda and Boann, and he apparently lived near Newgrange close to the River Boyne.

Angus’ parents were the Dagda and the river goddess Boann. The trouble was, Boann was the wife of Nechtan! The Dagda managed to hide the pregnancy by ensuring the sun stood still for the nine months from conception to birth. As a result, Angus was technically conceived, gestated and born in a single day!

Also known as Bran the Blessed, he was the Celtic God of Health, the brother of Branwen, the Goddess of Love and Beauty, and the son of the Welsh Sea God Lyr. His name means ‘crow’ or ‘raven,’ and he appears in the Mabinogion, a collection of ancient Welsh stories. Bran was also a sea god and is described as being so large that no house was big enough to accommodate him.

In one story, the King of Ireland, Matholwch, married Branwen but subsequently treated her badly. The result was a war between Ireland and Britain, and eventually, Bran and his men killed the Irish King. However, Branwen was so devastated at the destruction that she dropped dead.

In another tale, Bran was approached by a beautiful woman who told him to search for a group of islands with no death, sorrow, evil or sickness. He completed the mission and found the Isle of Women. One of his friends lured him away, but when Bran discovered he was unknown back home, he left once again.

As you can see, there several different spellings for the name including the anglicised ‘Bridget.' While it is common to associate the name with Saint Brigid of Kildare, it is also the name of one of the most famous goddesses in the Celtic pantheon. This ancient deity was a member of the Tuatha De Danann who ultimately became the Sidhe. 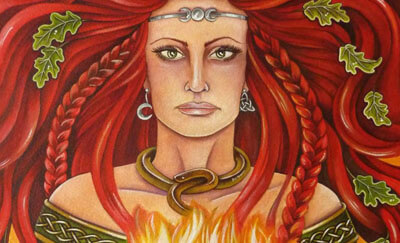 Brighid was also known as Brigid of the Flame, the element of fire and goddess of the sun.

Brighid was the Dagda’s daughter and oversaw healing, poetry, childbirth and smithcraft. She was also the Element of Fire and the goddess of the sun. There are some that suggest Brighid was actually the Great Mother and the Dagda was her son. According to legend, she was bathed in milk after birth and would only drink the purest milk from a fairy cow with red ears and white skin.

St. Brighid apparently died in 525 AD, but there are few verifiable records about her life, so most tales with the name ‘Brighid’ attached tend to be associated with the goddess. Her birth was celebrated by the Celts during the Imbolc festival at the start of February and even in the modern era, St. Brigid’s Day is celebrated on February 1.

Dana is one of Irish Mythology’s greatest goddesses and was the female leader of the Tuatha De Danann. She is also known as ‘Danu’ or as ‘Don’ in Wales. The name means wisdom, knowledge, wealth, abundance, and teacher. Scholars are still in disagreement as to the etymology of the name since the name ‘Danu’ does not appear in medieval Irish texts. Indeed, the main mention of the name is within the term Tuatha De Danann which means Tribe of the Gods of Danu.

Lady Gregory refers to Dana when writing about the Tuatha De Danann in her 1904 work Gods and Fighting Men. In the book, Dana is depicted as having a level of power that goes far beyond that of the other queens. There is a suggestion that the name is a link to the Indian water goddess Danu.

In ancient mythology, there is also a suggestion that Dana acted as the Divine Ambassador to the Elemental Kingdoms. She provided the platform for interactions between the Fairy Folk and the Leprechauns.

Diana was the goddess of the hunt, moon, and birth in Roman mythology. The name is aligned with the Latin words dius (daylight) and dium (sky). She is also associated with nature and in particular with wild animals, the forest, and the wilderness. Legend has it that she lived with the nymph Egeria in the Forest of Nemi. She is also identified with the goddess Artemis in Greek mythology. 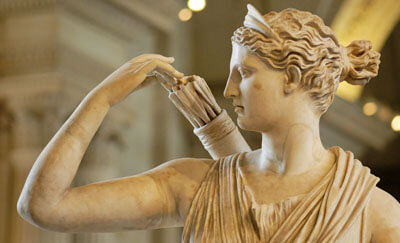 Diana was the goddess of the hunt, moon, and birth in Roman mythology.

The figure of Diana is also of paramount importance in the field of witchcraft. According to Aradia: Gospel of the Witches, which was written in 1899, Diana was the spirit of the stars who created all men, dwarves, and giants. The grove of Diana Nemorensis on the shores of Lake Nemi near Rome was the most famous place of worship of the goddess.

Although he may not be classified as a fairy, Diarmuid Ua Duibhne’s powers were the epitome of supernatural! He was the son of Donn, the God of the Dead, and one of the most prominent members of the Fianna in the marvellous Fenian Cycle of Irish Mythology. According to legend, Aenghus Og, the God of Love, was Diarmuid’s protector and foster father.

When Aenghus gave Diarmuid his magical sword named Moralltach (the Great Fury), the already great warrior was almost invincible on the battlefield. His impressive array of weapons also included another sword called the Little Fury and two spears that caused wounds which could never be healed. In one battle, Diarmuid singlehandedly killed 3,400 men and helped save Fionn and the Fianna.

Diarmuid was an exceptionally handsome man and is legendary for his ‘love spot’. He received it from a young lady who he made love to. It turned out that she was the personification of youth and she placed the spot on his forehead; it made him irresistible to women. He was also the lover of Grainne, a woman who was supposed to marry Fionn. Eventually, Fionn forgave his one-time friend, but one day, Diarmuid was gored by a bull. Instead of using his power of healing, Fionn hesitated, and the delay led to the death of Diarmuid.

Morgan Le Fay, sometimes called Morgana, plays a pivotal role in the magical world of King Arthur and Camelot. It is important not to mix up this enchantress of Arthurian legend with Morrigan, the Celtic Goddess. However, some scholars believe there is a link between the two. 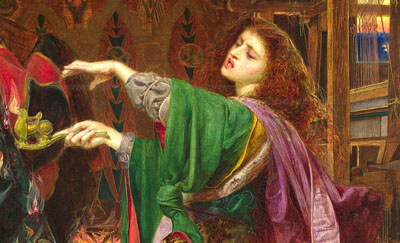 Geoffrey of Monmouth is accredited with introducing the character of Morgan into literature with his book The Life of Merlin which he wrote in the 12th century. She uses her beauty and charm to lure men into dangerous situations. In Arthurian legend, she has affairs with Merlin and Accolon and is also in love with Sir Lancelot although the knight does not share these feelings.

It is perhaps her surname ‘Le Fay’ which is the most intriguing aspect of this sorceress. It comes from the French term la fee which means ‘the fairy.' As a result, it is no surprise to learn that she possesses some of the traits associated with the supernatural female figures in Celtic Mythology.

One of the most famous tales in Irish folklore involves Oisin, the son of the legendary Fionn mac Cumhaill. Oisin’s mother was one of the fairy Sidhe people previously known as the Tuatha De Danann. One day, Oisin was hunting in the forest, and he was approached by a beautiful fairy woman known as Niamh of the Golden Hair.

Niamh chose Oisin as her lover and urged him to come to the land of Tir-nan-Og. Oisin agreed and lived with Niamh in the land of eternal youth for 300 years. Although he was happy, Oisin yearned to return home, so Niamh gave him a magical horse to complete the journey. However, he could not let his feet touch the ground. 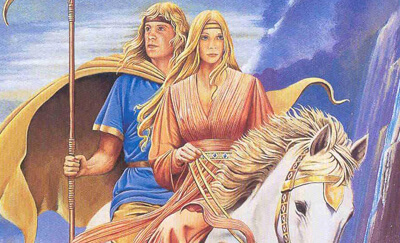 Niamh chose Oisin as her lover and urged him to come to the land of Tir-nan-Og.

Upon his return to Ireland, Oisin was upset to learn that the men were physically far weaker than before. He was also surprised to find that the nation had converted to Christianity. While he was riding along the road, he noticed three men struggling to lift a rock. Oisin knew he could lift it easily, so he stopped to help. Alas, his saddle-girth slipped and caused his feet to touch the ground. Oisin became frail and blind instantly, and the horse vanished. Saint Patrick tried to convert him to Christianity, but Oisin remained Pagan as he didn’t want a life without women and feasting.

It is an interesting story insofar as it pitted the Pagan religion against Christianity and depicted Pagans as vibrant and powerful. Rather than being the Land of Eternal Youth, perhaps the Tir-nan-Og Fairyland is a place for the dead. After all, once Oisin touched the earth, he aged instantly. There are many other stories of travellers to Fairyland turning to dust when they returned home; maybe this means they were dead all along?

The Celtic goddess Rhiannon is a pivotal figure in the Medieval Welsh story collection known as the Mabinogi. There is a possibility that she is based on an early Celtic deity who was one aspect of the Fairy Queen. She appears in the First and Third Branches of the Mabinogi.

In the First Branch, Rhiannon is pursued by Pwell, the prince of Dyfed. Eventually, he catches her and wins her heart. The couple gets married and have a son, but the child is stolen and discovered by the lord of Gwent-Is-Coed, Teyrnon. He and his wife raise the son as their own but are astonished when he grows at an incredible rate. Teyrnon eventually sees the resemblance between the boy and Pwell and returns him to his rightful home.

Rhiannon is also renowned for riding between the world of humans and the fairy kingdom on her white horse. If she touches your heart, it will be filled with inspiration and love. However, tales of Rhiannon also show that she is not always tender and motherly. She is quite ruthless when she needs to be.

There are potentially hundreds of names with their roots in folklore so if your name isn’t on the list, don’t worry! Whether you are an avid reader of mythology, a believer in magical creatures such as fairies, or prefer to avoid the entire niche altogether, there is no question that folklore has left an indelible mark on the history of literature. After all, it’s hard to beat a good story! 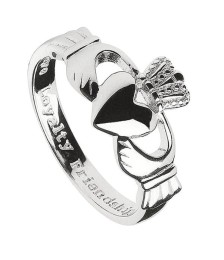 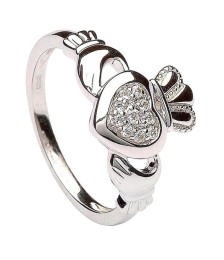 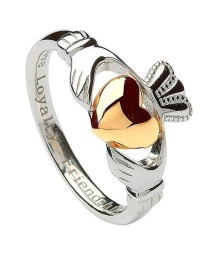