It is also believed that Niall was the founder of the most powerful Irish royal dynasty as his descendants ruled Ireland for the 6 centuries after his death. Niall received his epithet because he had a penchant for taking hostages from other kingdoms. According to folklore, his most famous hostage was a man known as ‘Succat’, better known as Saint Patrick.

While a traditional roll of high kings source states that he ruled from 368-395 AD, this has been refuted by some historians who point out that the Irish Kingship is only known to have began in the 9th century and state that the aforementioned source has been proven to be false. Modern historians have used Ui Neill genealogies to give a more accurate date of his reign and say it is probably 445-453 AD. 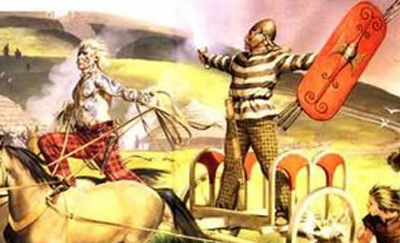 Niall was the founder of the most powerful Irish royal dynasty as his descendants ruled Ireland for the 6 centuries after his death.

According to legend, Niall was left on the ground by his mother Cairenn Chasdub as she was afraid of what Mongfind, the first wife of Eochaid Mugmedon, would do to the baby. A poet called Torna finds Niall and raises him. He returned to Tara and became popular with nobles who wished him to succeed Eochaid as king despite the fact that the king has four other male children.

On a hunting trip, the five boys go looking for water and come across a hideous hag who is guarding a well and refuses to give up the water unless she receives a kiss. Of the five boys, only Niall satisfies her with a kiss and she immediately transforms into a beautiful woman. Not only does Niall receive the water, he is also rewarded handsomely as the woman grants him and his next 26 descendants the High Kingship of Ireland.

Another story states that when Eochaid died, the kingship was still up for grabs. Crimthann, Mongfind’s brother, takes the throne but when he is away in Scotland, the four sons of Mongfind take the crown. Crimthann returned for war but Mongfind held a feast to keep the peace where she plotted to poison her brother’s wine. However, he would only drink if she also partook and the treacherous woman died along with Crimthann. After the dust settled, Niall became the High King and his half-brother Brion was second in command.

In Ireland, Niall is famed for consolidating power in the Northern region of Ireland and created the aforementioned Ui Neill dynasty. Yet he is also known for conducting a series of raids on Britain and France and is believed to have been involved in the creation of a Gaelic kingdom in the north of Wales. It was during one of his many raids on the coast of Britain that he is alleged to have kidnapped Saint Patrick. It is from here that Patrick ended up in Antrim where he was a herded the pigs of the chieftain Milcho on Slieve Mish. 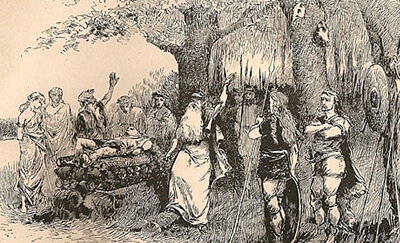 Niall fought in Britain and Gaul (modern day France), he came up against Roman legions and frequently defeated them in battle.

At this point, we are relying on ancient sources but they suggest that as Niall fought in Britain and Gaul (modern day France), he came up against Roman legions and frequently defeated them in battle. While this would be true if the 4th century AD date for his reign was accurate, we have established that his reign was the middle of the 5th century AD.

In that case, he probably did not encounter Roman legions as the Romans had all but abandoned Britain by 410AD with little trace of them after 430AD. If Niall did embark on campaigns in Gaul, he may have been up against weakened Roman forces as their Empire in the West was on its knees at this point.

Ancient sources say that Niall was killed by Eochaid, son of Ennae Cennsalach, King of Leinster. Although there are (predictably) different accounts of the event, all sources agree that Niall died outside of Ireland. According to the ‘Death of Niall and the Nine Hostages’ saga, Niall’s poet, Laidcenn mac Bairchild, refuses Eochaid hospitality which led to the destruction of the poet’s stronghold and the death of his son, Leat.

Legend has it that Niall declared war on Leinster and ended it when Eochaid was handed over. Niall chained Eochaid to a stone and sent nine warriors to execute him but Eochaid broke free and killed all the men. Laidcenn was then killed by Eochaid and Niall exiles him to Scotland. At this point, the sources contradict one another as stories of Niall’s demise range from being shot with an arrow in Scotland to being killed in the Ictian Sea.

One of the more commonly espoused accounts states that Niall was camped at the River Loire in Gaul when Eochaid shot him with an arrow from across the river. Niall’s body is then carried home by his loyal men and fought seven battles along the way. Torna, Niall’s foster mother, reportedly died of grief when she learns of his death. Niall’s body was said to have been buried at Faughan Hill in Jordanstown, just a few miles from Navan, County Meath, which was at that time the heartland of the High Kingship.

While certain historians (with a fair amount of hyperbole) have compared Niall of the Nine Hostages’ reign to that of Alexander the Great, a more apt comparison would be Genghis Khan due to the extraordinary amount of descendents he has! A 2006 genetic study conducted by Trinity College Dublin shows that 3 million Irishmen are descended from Niall! A study of the Y chromosome (only passed down through men) showed that it traced back through dozens of generations to one man. 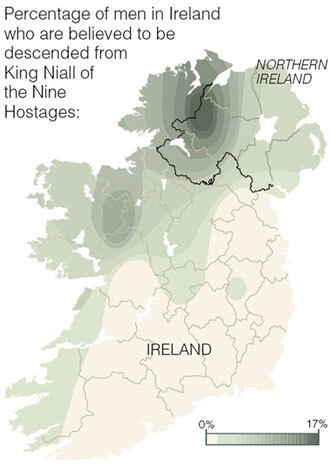 Further research showed that this person came from the Ui Neill line and Niall was the founder of the dynasty which indicates that he is the ancestor of about 8% of Irishmen worldwide! The Trinity team also showed that in a certain area of Northwest Ireland, over 21% of men carried Niall’s genes. The chromosome turned up in 16% of men in west and central Scotland and 2% of European-American New Yorkers.

At one time, it was assumed that Niall of the Nine Hostages was a mythological figure but these studies suggest otherwise. Tales of his exploits may be exaggerated but his impact on the history of Ireland certainly cannot be denied.