Some people believe they were descended from the Nemedians, who ruled in the third age and were driven from Ireland after a major battle with the Fomorians. According to myth, there were five ages of the world before the mortal sons of Milesius conquered and settled the land. The Tuatha Dè ruled in the fifth age of the world.

The Tuatha Dè were believed to have garnered their skills and knowledge of magic and the occult in four different mythical cities: Falias, Gorias, Murias and Finias, from which they also acquired four magic talismans. The first was the Stone of Fal or Stone of Destiny, which cried out whenever a true king of Ireland stepped on it. 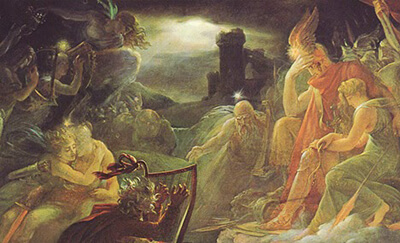 For many years the Tuatha Dè Danann lived peacefully, practicing their art and magic on the Emerald Isle.

Then, there was the Cauldron of Plenty, a bronze cauldron belonging to Dagda, one of the great warriors of the race. This cauldron would satisfy the hunger of anyone who ate from it. Another treasure was the bloodthirsty weapon (sometimes a spear, a sword, or a sling-shot) of Lugh, another respected warrior of the Tuatha Dè. Finally, there was the Magical Sword of Nuada, which always swung a fatal blow.

The Fir Bolgs were the rulers of Ireland prior to the Tuatha Dè Danann landing on the shores. Different versions of the myth say that the Tuatha Dè came to the land on a thick cloud, or sailed on ships, which they then burned so as never to be able to retreat. Either way, their arrival was concealed from the Fir Bolgs by fog or smoke, which was said to have lasted three days and nights. When the air cleared, the First Battle of Magh Tuireadh ensued.

The king of the Tuatha Dè Danann, Nuada, led his people to victory in the war but lost an arm when one of the Fir Bolgs sliced it off. He was made a magical silver arm that moved just like his original arm, but even so, the Tuatha Dè considered Nuada to be less than perfect, and so unfit to keep his place on the throne. They elected Bres the Beautiful to rule them, whose mother was a Tuatha Dè, but whose father was a king of the Fomorians, a semi-divine race associated with wild chaos. This choice was made in an attempt to keep peace between the Fomorians and the Tuatha Dè. 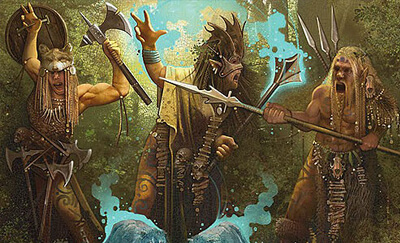 The king of the Tuatha Dè Danann, Nuada, led his people to victory in the war but lost an arm when one of the Fir Bolgs sliced it off.

However, Bres was a greedy tyrant who did not treat his people very well at all. Hoarding the wealth for himself, Bres insulted the gods of the race by treating them like lowly servants. The Tuatha Dè eventually forced him off of the throne, and Bres went crying to his father. He convinced the Fomorians to attack the Tuatha Dè, who had reinstated Nuada as king because a magical healer had restored Nuada’s true arm.

During the Second Battle of Magh Tuireadh, the Fomorian Balor killed Nuada. Lugh of the Long Arms, the Tuatha Dè god of the sun, broke away from his ring of guards and rode onto the battlefield, killing Balor and frightening the rest of the Fomorians into fleeing. Thus, Lugh became the next king.

For many years the Tuatha Dè Danann lived peacefully, practicing their art and magic on the Emerald Isle. Dagda the Good, the fertility god of the Tuatha Dè, inherited the throne after Lugh, and it was Dagda’s grandsons who practiced the role when the Milesians discovered the land. At first, the Tuatha Dè tried to negotiate with the invaders, who were Celts from the Iberian Peninsula near Spain.

Amergin, a great poet and druid of the Milesians, conversed with the goddess Eriu, and was nearly convinced as taking her on as one of their own gods and settling down as mortals with the race of the Tuatha Dè. The oldest Milesian Man, Donn, however, would not have it. He believed his own gods had led them there and wished to honor only them. Donn soon drowned, cursed by Eriu. The chieftains spoke with Amergin and the Milesians and then waged war with the Tuatha Dè Danann.

What happened to the Tuatha Dè Danann?

Although the Tuatha Dè whisked up a magical storm to drive the Milesians away, Amergin calmed the weather with his verse. Then, the Tuatha Dè were swiftly defeated, but the Milesians took the name of Eriu as their own to identify their new property, which they called Ireland (sometimes still referred to as Eriu or Eire today). There are many different legends about what happened to the divine race then.

The chieftains spoke with Amergin and the Milesians and then waged war with the Tuatha Dè Danann.

Some say that Amergin divided the land and allotted the underground to the remaining Tuatha Dè while his own race of people lived and walked upon the earth. Another version reports that Danu sent many of the Tuatha Dè to live in Tìr na nÒg, and she found homes under the earth for the others who did not wish to leave.

Still another version says the Tuatha Dè did not fight the Milesians at all because their skill in prophecy showed them that the Milesians were destined to live and rule on the island in the sixth age of the world. In this story, the Tuatha Dè prepared their future kingdoms under various hills and fled to their subterranean abodes when the Milesians landed in their ships.

In some fashion were the Tuatha Dè consigned to live below the earth’s surface, in sidhs, or mounds. They became known as ‘Aes sidh,’ or people of the mound. They dwell in their underground palaces and cities, and sometimes appear above the land, to switch mortal children with fairy children, grant wishes to people, or engage in other shenanigans. The Sidhe, also called the Fairy-Folk or “little people” are still said to populate Ireland today, practicing magic and mischief in their glorious, glittering kingdoms in the fairy mounds dotting the landscape of the Emerald Isle.